* Total receipts for next financial year to be around Rs 1.67 trillion against expenditures of Rs 1.71 trillion, resulting in a deficit of Rs 33.84 billion 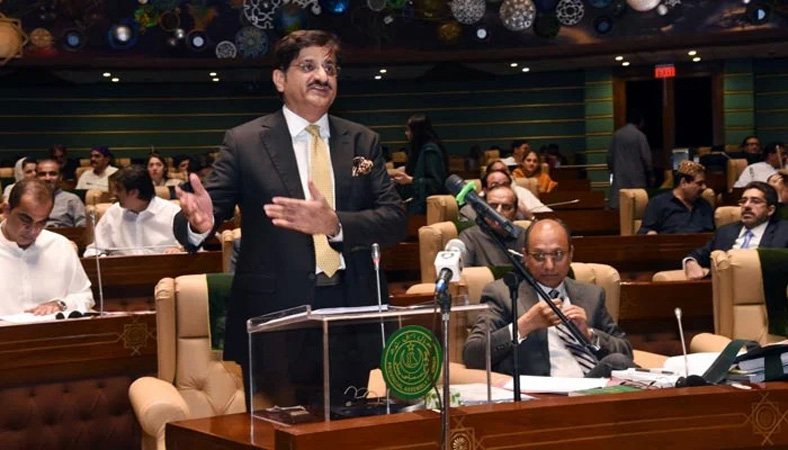 The chief minister said the past year witnessed ‘extraordinary changes’ at the domestic and international level which ultimately impacted the common man. “Despite that, we will leave no stone unturned to ensure economic and political stability in the province, contributing its shares [to] the common national effort, which is in line with the vision of the PPP,” he said.

Sharing the details of the budget, the CM said the total receipts of the provincial government for the next financial year would be around Rs1.67 trillion against the expenditures of Rs1.71 trillion, which shows a deficit of Rs33.84 billion.

He added that the provincial tax collecting organisations would achieve their collection targets such as the Sindh Revenue Board’s (SRB) Rs180 billion, Excise and Taxation’s Rs1.20 billion, and the Board of Revenue’s Rs30 billion.

According to the CM, the provincial government – over the next 11 months (July to May) of the outgoing financial year – has received Rs716 billion against a share of Rs732 billion which shows a shortfall of Rs16 billion.

Shah added that his government, during the said period, received Rs45 billion in straight transfers and in Octroi and Zilla Tax (OZT) by receiving Rs18.9 billion against a share of Rs19.7 billion.

Amid the ruckus, the CM Sindh continued to share the details of the ADP 2022-23, mentioning that the district ADP size has been kept at Rs30 billion as was done during the current financial year.

Moreover, Rs26.850 billion have been allocated for the pro-poor, social protection, and economic sustainability package. Moving towards the relief measures, the CM Sindh announced that the ad-hoc relief allowances for 2016, 2017, 2018, 2019, and 2021 at the rates admissible to employees of the federal government were being merged and revised basic pay scale 2022 for civil servants of Sindh government was being introduced on the pattern of the federal government. He also announced an ad-hoc relief allowance at the rate of 15% of basic pay scales to government servants from July 1, 2022. “Disparity Allowance at the rate of 33% of basic pay will be paid to civil servants in BPS-1 to 16 and at the rate of 30% to civil servants in BPS-17 and above in lieu of the differential rate of ad-hoc relief allowances 2013, 2015, 2016, 2017, 2018, 2019, 2020 and 2021, which are being abolished from July 2022,” he said.

Shah announced that all the provinces have not presented their budgets yet. “If they decide to increase the salaries of their employees, more than the employees of the Sindh government, we would take decisions accordingly, though the salaries and pensions of our employees are better than the employees of other provinces,” he said. The CM said that the pensioners in the province were already getting a 22.5% increase in net pension than pensioners of the federal government till February 2022. Therefore, he said an increase at the rate of 5% of net pension would be paid to the pensioners of the provincial government from July 1, 2022.

According to Shah, after the announcement of a 10% increase in the net pension by the federal government in March 2022 and enhancement of the rate of increase to 15% from July 1, 2022, the pensioners of the Government of Sindh would still be getting 12.5% more of net pension compared to that of the pensioners of the federal government. The chief minister also announced that the police constables posted on grade BS-5 will be promoted to grade BS-7. CM Sindh announced to exempt toll manufacturing services from Sindh services tax, adding that a 5% reduced SST rate for “recruiting agents” would continue for the next two years – meaning up to June 30, 2024. “This relief is proposed for Pakistanis aspiring to work overseas,” he further elaborated.

The rate of SST on commission charges received by food delivery channels from home chefs has been reduced from 13% to 8% for a period of two years ending on June 30, 2024. In all other cases, the services provided or rendered by commission agents shall continue to be liable to SST at 13%. He further added that the existing exemption on health insurance services will continue further for a period of one year till June 30, 2023. GIZ, a German development agency facilitating development projects in Sindh, has also been granted conditional exemption on sales tax on services as indirect relief to the public. The chief minister said that his government has kept the education sector as its top priority by allocating Rs326.8 billion which forms more than 25% of the total budget outlay. In the proposals for the upcoming budget, the Sindh government has adopted a policy to either establish a full-fledged university or a campus of a recognised public university in at least seven districts one each in Korangi, Karachi West, Keamari, Malir, Tando M Khan, Tando Allah Yar, and Sujawal. Sharing details of these universities, he said that Korangi will have a University of Technology and Skill, Vocational/Industrial Development, while Karachi West and Keamari will have sub-campuses of this university. Malir will have a sub-campus at the NED University. Likewise, Tando M Khan and Tando Allah Yar will be given sub-campuses of IBA Karachi or Sukkur IBA and Sujawal will have a sub-campus of Mehran University.

The total outlay of the health budget for the fiscal year 2022-23 is proposed at Rs206.98 billion, covering primary, secondary, and tertiary healthcare services, preventive interventions as well as other communicable and non-communicable diseases. This year the health sector budget is 14% higher in comparison to Rs181.22 billion during FY22. For the next financial year, the total allocation for the Home Department, including Sindh Police and jails, has been enhanced to Rs124.873 billion from Rs119.98 billion. The budget for irrigation has been enhanced from Rs21.231 billion to Rs24.091 billion. Allocation for the agriculture and irrigation department in ADP is Rs36.2 billion.

The water and sewerage sector will be allocated Rs224.675 billion in the financial year 2022-23. Two major schemes for the city will be executed during the coming financial year. The schemes include: Re-settlement of affectees of Gujjar, Mehmoodabad, and Orangi Nallahs for Rs9.423 billion Greater Karachi Bulk Water Scheme K-IV augmentation works for Rs511.724 billion. The Sindh government has increased the Sindh Solid Waste Management Board’s budget from Rs8 billion to Rs12 billion for the next financial year 2022-23.