Enhanced ties with Pakistan our top priority: US envoy 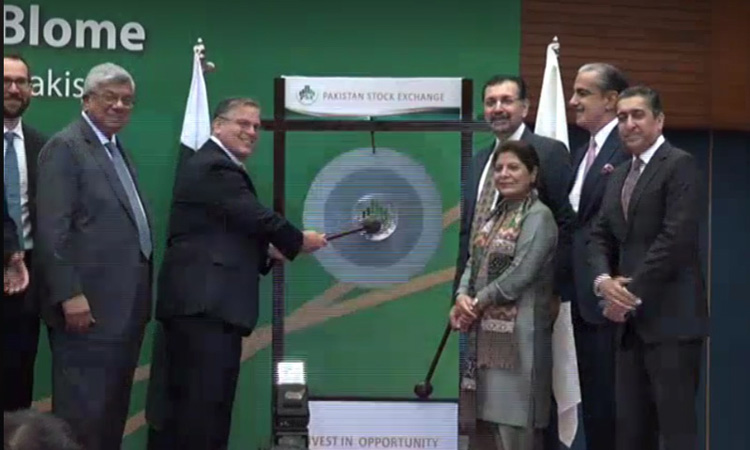 US Ambassador to Pakistan Donald Blome Tuesday said enhancing ties with Pakistan was his ‘top priority’ and they wanted more American companies to invest in Pakistan. “Enhancing ties is our top priority. We welcome US investment in the stock exchange, and we want more and more companies to come to Pakistan,” he said during a visit to the Pakistan Stock Exchange (PSX) where he rang the bourse’s gong to mark the beginning of the trading session. The US envoy highlighted the need for measures to ‘strengthen trade ties with Pakistan’ and said the US companies were manufacturing excellent products. Blome said it was his first visit to Karachi and he was pleased to have visited the PSX. “This is my first trip to Karachi and I am feeling really good after arriving here,” he said. He said this year would mark the completion of 75 years of ties between the US and Pakistan PSX Chairperson Shamshad Akhtar said, “We have to work together with developed countries and make the country progress.” She said the US and Pakistan had good trade ties since 1970. The US envoy’s visit to the PSX comes after he signaled Washington’s intention to move on from the regime change controversy – which is rooted in former prime minister Imran Khan’s claim of the US orchestrating his ouster from the government – by engaging in a robust two-way communication with the country’s government, political parties and civil society. Blome – the first full-time American envoy in Islamabad after a gap of almost four years – assumed the charge of his assignment when Afghanistan is apparently no more a dominant issue in the bilateral ties following last year’s withdrawal of US forces from there at the end of the 20-year-long war – the longest in American history. Instead, the heightened anti-American sentiment in Pakistan following Imran’s allegations has become the foremost challenge for Washington to execute its foreign policy goals in Pakistan.