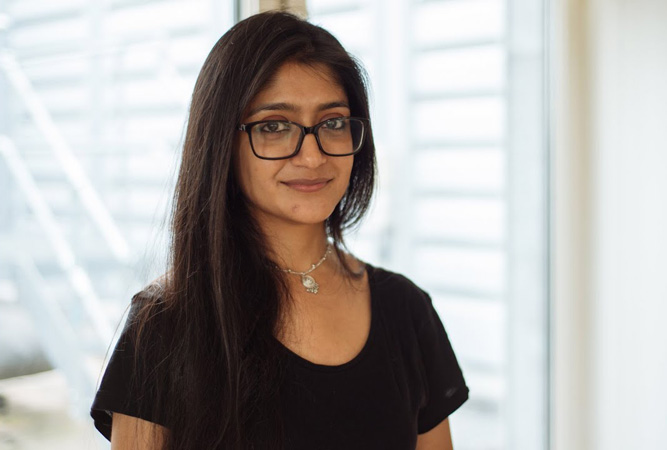 “Moving from Pakistan to London was never easy for me, there were plenty of challenges. Not only did I face these challenges but I worked tirelessly to overcome them,” Laraib Atta, visual effects artist and daughter of renowned Pakistani folk singer Attaullah Khan Esakhelvi, told Independent Urdu in a recent interview.

“That is why today, I am one of the few women in the world working in the field of visual effects while I am probably the first female visual effects artist from Pakistan.”

Laraib, who is currently based in London, is associated with the George Lucas Company. She has worked on various internationally acclaimed films, commercials and documentaries, including the likes of No Time to Die, Fast and Furious Nine, Tenet, Chernobyl and Doctor Strange in the Multiverse of Madness, among others. Atta also boasts several award nominations, including Oscars, Ames, BAFTA, as well as the Visual Effects Society Award for her outstanding work on the Netflix series Alter Carbon. She even lectures at conferences around the world. Her brother, Sanwal Esakhelvi, on the other hand, curates concerts for Punjabi and Seraiki artists abroad.

“My team and I are introducing Pakistani culture to the world,” she said. “Children are not bound to do what their parents do,” added Laraib. I’ve been interested in toy stories and technology since I was a kid. So, when at 19 I moved to London, my brother suggested that I take a visual effects course. I liked that idea and it was something I wanted to do so I guess I succeeded in it.”

According to Laraib, any clip that features live action in any capacity, is digitally edited, depending on the client’s needs. She elaborated on how all the digital effects applied through various softwares during post production of any commercial, film or video is part and parcel of what she does.

“During post-production, various tools and editing softwares are used to change backgrounds of a film. There are different areas to oversee and work on. We prepare several variations to send to clients. It is a time-consuming process because we often end up redoing everything. Just because we worked hard on something and liked it, doesn’t mean it’ll get approved. It has to be improved again and again. You have to work until the customer is satisfied,” shared Laraib.

The artist confessed that it usually takes several days to complete a few minutes and seconds of films, advertisements and sometimes, months go by. “I have worked on very famous films. I have worked on various Oscar nominated films. My work on them was much appreciated. Each of our projects is difficult. No project is easy. We jointly form a team. Every member of the team has a different job. I was successful because it was my hobby. From the beginning, I loved telling and listening to stories through technology,” she asserted.

Laraib recalled how she’d often remain isolated as a child and her father, having pursued a profession that is often looked down upon or not even considered a profession by some, along with her mother, would always encourage her to do what she wanted. “I was young when I came here. I have been a student of music since I was a kid,” said Sanwal, who’s still learning while organizing various concerts in the United States and Pakistan together with a company in their attempt to promote Punjabi and Seraiki culture. About her sister’s achievements, he said, “The secret to Laraib’s success is that she is doing what she wanted to do in her life. It is both her hobby and profession. That’s the same with me. That is why we are succeeding. ”

Laraib acknowledged, “Even here, men have monopolised the field of visual effects. And coming from Pakistan, to make my space in this fraternity as a woman, came with its fair share of challenges. Even now, the global presence of women in this field should be considered zero. So, we have to be brave to even consider stepping in.” And for Laraib, the real test of succeeding in the field of visual effects as a woman began when she returned to work after taking a maternity break.

Laraib recalled getting married while working and then becoming a mother, due to which, she had to take time off from work. “Contacts were down. I also lived outside the UK for a while. So, when I came back to London, I couldn’t find work,” she confessed. “I had to work very hard to get a job. I went out of my way trying to connect with people. You have to really put yourself out there to get work and completely abandon that comfort zone you’re in” she asserted. “I was pitching my work daily to no avail, despite my glorious past.”

But Laraib was rarely ever disappointed. “If I failed, I would start again, I knew that after every failure, the door to success opened. During this time, I met a female producer whose company had won several Oscars. I told her in a meeting that I was looking for a job. She told me to send a formal application and that I would get a call if shortlisted. Now, I had already applied to several places but no one called me.” Thus, Laraib immediately availed the opportunity and began telling the producer that she is an experienced and talented visual effects artist. “I told her about my past work. I also mentioned that I am a mother. There was a break and now I have to prove myself to the world again. She asked me to send her my CV right away and then a few days later, I got a call from them,” recounted Laraib.

Sanwal also spoke about the challenges his sister faced, overcame and what the two are really trying to do with their work. “Of course, there was a break in Laraib’s work and there were some difficulties but we knew she was talented and soon she was going to show her abilities again and that is what happened. The competition is fierce on social media. The world has become a global village.” The artist, who often listens to songs in languages that he cannot speak, added, “That’s all we’re trying to do here. It is not necessary that the song should be understood, as long as you’re resonating with the music, that’s all that matters. Because music has no language. Everyone enjoys good music.”