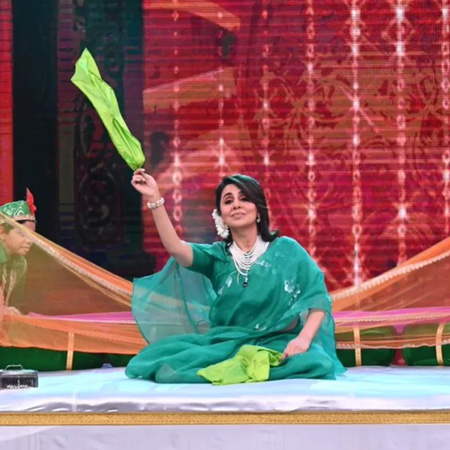 Dance Deewane Juniors has become one of the top-rated shows in a short span of time. The kids’ dance reality show offers a national-level platform for the talented kids to showcase their talent. The show is graced by several celebrities every week and in the upcoming episode, we will see Padma Shri Award-winning singer Usha Uthup joining the judges on the show. Dance Deewane Juniors’ weekend episode will see the contestants and judges celebrating the retro theme on the sets of the show.

While several stupendous performances await the audience this week, the terrific performance by the ‘All Star’ group on ‘Parda Hai Parda’ will steal the spotlight. After which, judge Marzi Pestonji requests the original star of the song, Neetu Kapoor to recreate this superhit song on stage. Neetu Kapoor sportingly steps up and gives a marvelous performance taking everyone down the nostalgia. The viewers will also witness a blast from the past as they will get to watch Neetu Kapoor recalling her ‘Yaadgaar’ moments with the late Rishi Kapoor on their hit song ‘Parda Hai Parda’.

Neetu Kapoor shares, “Rishi ji and I were at loggerheads at the time of this song’s shoot. We used to fight a lot with each other and had broken up at that time. It was a romantic song where I had to throw a rose but what was going in my mind was something else.” However, their natural chemistry certainly worked its magic on the screens and etched this song in our memories forever.

In the recent promo, it was also seen that Neetu Kapoor goes down memory lane and reminisces the old Bollywood iconic dialogues. Along with Neetu, Karan Kundrra, Usha Uthup, and also, one of the little contestants joins the ‘Jugalbandi’ of filmy dialogues.