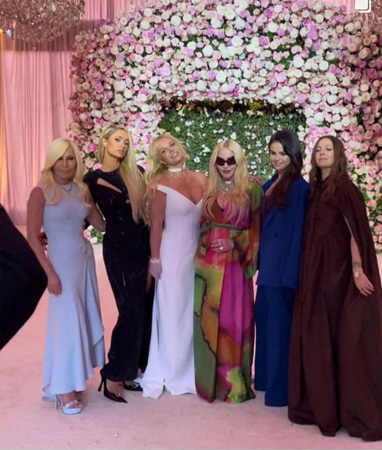 Selena Gomez showered praises over Britney Spears after her wedding to Sam Asghari on Friday. Taking to Instagram, the 29-year-old singer shared a postcard-worthy photo of her posing with the bride as the dup were also joined by Madonna, Drew Barrymore, Paris Hilton and Donatella Versace. Gushing over the lovely day, Gomez wrote in the photo, “Congrats Britney!! So honoured to have been part of your wedding day. Love you!!” The Wolves singer looked stunning in a strapless blue jumpsuit as she wore a matching jacket over it later in the night. Spears also returned the compliment by writing that Gomez was “way prettier in person if that’s even possible.” Opening up walking down the aisle with Asghari, Spears wrote on the Facebook-owned platform, “I was so nervous all morning but then at 2:00 pm it really hit me … WE’RE GETTING MARRIED!!! I had a panic attack and then got it together.” “WE DID IT !!! WE GOT MARRIED !!! Gggggeeeeezzzzz !!! It was the most spectacular day !!!” she added.