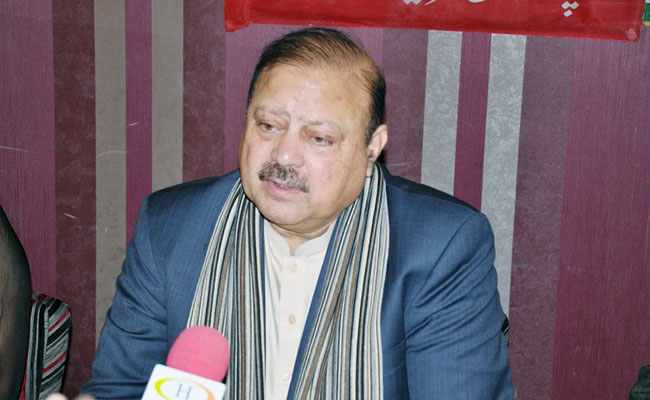 MIRPUR (AJK): Azad Jammu and Kashmir President Barrister Sultan Mahmood Chaudhry has said that being an important member of the European Union, Ireland can play a big role in the resolution of the Kashmir issue.

Barrister Chaudhary made these remarks during his meeting with Martin Kenny, the shadow minister for Justice in the Irish Parliament in Dublin on Thursday. On the occasion, the President briefed Kenney about the dire situation in Indian Illegally Occupied Jammu Kashmir (IIOJK) and Hurriyat leader Yasin Malik’s life sentence in a false case by an Indian court. Later, the AJK president addressed a reception hosted in his honor by the Pakistani and Kashmiri community in Dublin.

Referring to the abysmal situation in the Indian occupied Kashmir, the president said that the worsening political and human rights situation in the region demands urgent attention of the international community. While Indian oppression in occupied Kashmir has reached its climax, he said, Kashmiris and Pakistanis living in Ireland should play their role to galvanize international support for an early and amicable settlement of the Kashmir dispute.

At this crucial phase, he said that the people of Occupied Kashmir were desperately looking for the international community’s help. “Since the special status of Occupied Kashmir was abolished on August 05, 2019, India has intensified its human rights violations in Occupied Kashmir”, the AJK president said adding that the most worrisome aspect was that India was changing the region’s demographics to convert Muslim majority state into a minority.