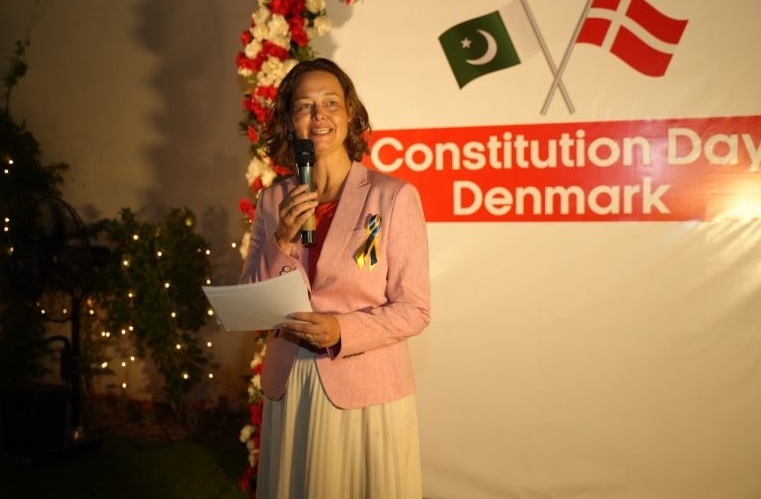 ISLAMABAD: Ambassador of Denmark to Pakistan, Lis Rosenholm, has appreciated the Government of Pakistan for its outstanding support in the evacuation process of the Danish citizens from Afghanistan last year.

Addressing a ceremony of the Constitution Day here in Islamabad, she thanked the Government of Pakistan, Ministry of Foreign Affairs, Ministry of Interior, Armed forces, authorities, staff at Islamabad International Airport, diplomatic colleagues, and the Danish and Norwegian Embassy staff for their support in evacuation process.

Ambassador said, “Your friendship and kindness at very a difficult time will be written into the history books of Denmark as your tireless efforts have enabled both airlifts and land-evacuation of more than a thousand persons.”

She said that the Danish government commissioned an extensive and independent evaluation of the evacuation effort. The experts behind the evaluation highlighted Pakistan’s collaboration, commitment, and flexibility as decisive for the operation’s success.

“I want to express my heartfelt thanks on behalf of Denmark. We have nothing but respect, gratefulness, and admiration for the work you have all delivered”, Ambassador added.

Speaking about the importance of Denmark’s Constitution Day, she said that it is a day when Denmark celebrates democracy, freedom of speech, human rights, and personal freedom. Danes live in a democratic society, where you and your neighbor have the same rights – regardless of gender, skin color, religion, or income.

Explaining the significance of bilateral relations, Ambassador Lis Rosenholm stated that Denmark and Pakistan had enjoyed cordial diplomatic relations for more than 70 years, dating back to the first years after Pakistan became an independent and sovereign state.

The relationship between the two countries continues to enhance – with increasing bilateral trade and cultural exchange and knowledge. And a sizeable Pakistani diaspora in Denmark takes pride in building bridges between our nations and contributing to economic and social development in Pakistan and Denmark, she said.

She termed climate change and environmental and biological degradation as the most significant challenges of the contemporary era. She added that Pakistan and Denmark adopted the Sustainable Development Goals and the Paris Agreement in 2015, providing a solid basis to further develop our cooperation on sustainable development, climate action, human rights, and gender equality.

Ambassador further states that Pakistan has set ambitious green transition policies to integrate renewable energy, support sustainable and just development, and mitigate climate change. Denmark is a world leader in the green transition. “We stand as global leaders in transforming our energy sector from fossil fuels to renewable energy, bringing decades of experiences and insights into energy planning, integration of renewables, offshore wind, and energy efficiency.”

She said that with Pakistan’s ambitious policies for a green transition on the one hand and Denmark’s expertise in green growth and sustainability on the other hand, both countries have a strong basis for collaboration.