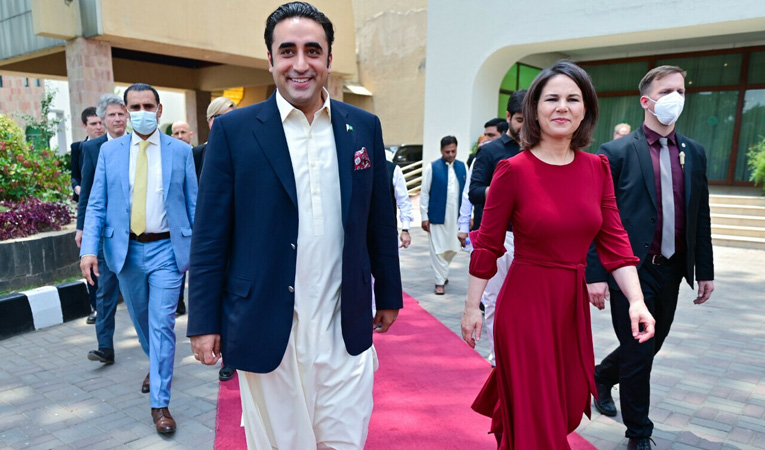 “When we look across the border, the Taliban is leading the country to a downfall,” she said in a joint news conference with Foreign Minister Bilawal Bhutto Zardari in Islamabad. This is the first visit by a foreign minister from a western country since the change of government in Pakistan. Annalena held formal talks with her Pakistani counterpart Bilawal Bhutto Zardari covering bilateral relationship, Afghanistan, Russia-Ukraine conflict and other issues.

On Afghanistan, she issued a clear warning, insisting the country was heading in the wrong direction under the Taliban rule. “Parents don’t know how to feed their children. Girls are deprived of their education. Women are almost excluded from participation in public life. Dissenting voices are brutally suppressed. The economy is grinding to a halt,” she said. She added that the international community must stand united and together inform the Taliban that the country is “heading in the wrong direction”.

“As long as they go down this path, there is no room for normalization and even less for recognition of Taliban as legitimate rulers of the country,” she stressed, clarifying that the Taliban rule would not be legitimized, says a news report.

However, despite expressing serious concerns over the Taliban’s rule, the German FM said the international community will not “forget and abandon” the people of Afghanistan. “It is not the fault of the people. The Taliban overthrew the government and since then, they have tightened their grip on the Afghan society. We will continue to provide humanitarian aid and support to the people who need it the most, especially women and girls, who suffer the most under the Taliban’s rule.”

Referring to the ongoing war between Russia and Ukraine, she said Moscow had set a dangerous precedent by invading the neighbouring country. “Russia’s invasion sets a wrong precedent. Our world is more dangerous if the law of the strongest applies, rather than international law.” Foreign Minister Bilawal emphasized that there was no change in Pakistan’s stance on the Russia-Ukraine conflict and said Pakistan, being a smaller and developing country, would also advocate pursuing international law and rules. Bilawal expressed concerns over the humanitarian situation unfolding in Ukraine as a result of the Russian invasion. Bilawal maintained that Pakistan did not want to be dragged into the conflict particularly given that it had just experienced decade after decade of conflict in Afghanistan.

The German FM also voiced concerns over the human rights situation in Indian Illegally Occupied Kashmir (IIOJK). “We support the work of the United Nations. Also with the situation in Kashmir to ensure that all human rights are being guaranteed within the different bodies of the United Nations.” She added that constructive approach and confidence-building measures were the only way to improve the relationship between Pakistan and India. She also welcomed the Line of Control (LoC) ceasefire between the two countries, which was agreed upon in 2021. She stressed the need for both sides to reduce tensions. She pointed out that Russia’s restrictions on wheat exports and its capture of Ukrainian stocks had sent global food prices sky-rocketing and putting the livelihoods of countries dependent on wheat imports at risk of a food crisis. Both foreign ministers expressed grave concern over the deteriorating climate conditions of the world.