* Abbasi says load shedding to come down to three hours by June 16 and between 1.5-2 hours only by June 30 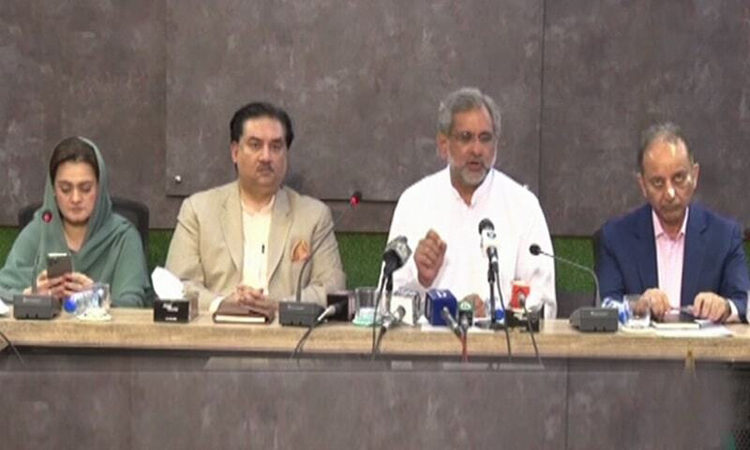 PML-N leader and former prime minister Shahid Khaqan Abbasi said Monday the government was ‘sorry’ for the ongoing electricity load shedding in the country and announced that the duration of outages would be reduced to three-and-a-half hours from Tuesday (today).

He made the announcement while addressing a press conference alongside State Minister for Petroleum Musadik Malik, Minister for Power Khurram Dastgir Khan and Information Minister Marriyum Aurangzeb. Abbasi said the government needs time to rectify the power shortage as the country is producing 21,000 megawatts and there is a shortfall of 4,000 megawatts. As a result of the shortfall, the authorities had to opt for a four-hour load shedding across the country, the ex-prime minister said.

Abbasi said Prime Minister Shehbaz Sharif held a meeting on Monday in this regard and decided to reduce load shedding to 3.5 hours, adding that additional funds have been released to facilitate power providers. In the next phase, when coal is imported, load shedding will move below three hours by June 16, Abbasi said, adding that from June 30, the power outages will be in between 1.5-2 hours only. He added the government hopes that the duration of the load shedding will further decrease in July.

The PML-N leader further said that the government was not interested in making excuses and was focused on fixing the issues plaguing the country. He lashed out at the former government for the lies it told regarding establishing power plants, saying that Pakistan was unable to fulfil its electricity demand for the summer. He said that the previous government lied about installing power plants during its four-year tenure. “Two big plants that were used to generate cheap electricity were to be completed in 2019 could not be completed till today. Not a single plant has been installed in the last four years,” he added.

The former prime minister said that the government has increased the production of coal-fired power plants and the fertiliser and other industries have also been restored. The PTI-led government lied to the nation that the power generation capacity of the country was 30,000 megawatts. “Even if all power plants are started, they will not be able to produce 27,000 megawatts combined. Not even 1 kilowatt of energy was generated,” said Abbasi, adding that the “country was only safe because of the Qatar agreements.”

Shedding light on the current government’s efforts of producing electricity, the PML-N leader said that the government was generating electricity by buying expensive liquefied natural gas (LNG) and furnace oil from the market. Abbasi added that the government was not charging taxes from people on petroleum products, adding they will be sold at the original price. He also said that electricity was being generated at Rs60 per unit while it was being provided to the consumers at cheaper rates.