* 'I could not be more proud of the woman you are,' the 49-year-old wrote, along with a photo of Apple gazing into a mirror 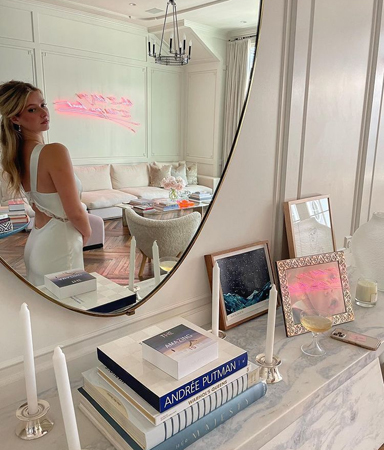 Gwyneth Paltrow’s first born is all grown up. The actress took to Instagram to wish her daughter Apple a very happy 18th birthday, admitting she was at a “loss for words” at the milestone.

“I could not be more proud of the woman you are,” the 49-year-old wrote on May 14, along with a photo of Apple gazing into a mirror. “You are everything I could have dreamed of and so much more. Proud doesn’t cover it, my heart swells with feelings I can’t put in to words. You are deeply extraordinary in every way.”

She continued, “Happy birthday my darling girl. I hope you know how special you are, and how much light you have brought to all who are lucky enough to know you. Especially me. I say it all the time and I will never stop… in the words of auntie Drew, I was born the day you were born. I love you.”

Ever since Gwyneth and ex Chris Martin welcomed Apple into the world in 2004, their daughter’s unique moniker has been an often-discussed topic of conversation.

“Her dad came up with the name and I fell in love with it,” Gwyneth confessed of the fruit-inspired name last month during an Instagram Q&A. “I thought it was original and cool. I can’t imagine her being called anything else.”

The actress previously gave credit to the Coldplay frontman in August 2004, explaining to Oprah Winfrey why Chris first made the suggestion to go with Apple.

“When we were first pregnant, her daddy said, ‘If it’s a girl I think her name should be Apple,'” Gwyneth said in the interview. “It sounded so sweet and it conjured such a lovely picture for me, you know.”

She added, “Apples are so sweet and they’re wholesome and it’s biblical.”

Gwyneth and Chris-who “consciously uncoupled” after 10 years together in 2014-also share son Moses, 16. Earlier this year, the proud mom paid tribute to Apple on Instagram in celebration of International Women’s Day. “I’ve been spending the morning thinking about all of the incredible women I love, who love me back hard,” she began a caption of a photo of her FaceTiming her daughter on March 8. “But today I want to pay tribute to one woman on the cusp of it.”