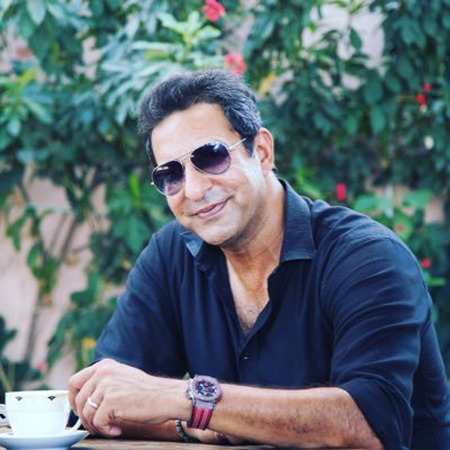 LAHORE: June 3rd is the day when one of the greatest left-arm fast bowlers in history was born in Lahore, Pakistan in the year 1966. Wasim Akram celebrates his 56th birthday on Friday (today). Wasim was at the top for almost 20 years, in which time his famous whippy action brought him a record 916 international wickets for Pakistan. In October 2013, Wasim was the only cricketer from Pakistan to be named in an all-time Test World XI on the 150th anniversary of the Wisden Almanack. He is next only to Sri Lankan great Muttiah Muralitharan as the leading wicket-taker in ODIs but is the first bowler to breach the 500-wicket mark in one-day internationals. He was the first bowler to grab four hat-tricks in international cricket — two in Tests and two in ODIs. With a quick arm action, good pace and the ability to generate reverse swing, no one pacer has been a better exponent of swing bowling than Wasim. He is the ninth highest wicket-taker in Test history with a haul of 414 wickets. His tally of wickets is the highest for any left-arm bowler. In only his second Test, he took 10 for 128 in Dunedin in 1985. (He went one better on the 1994 tour, when he took 11 for 179 in Wellington.) He demolished England with two unforgettable deliveries, to Allan Lamb and Chris Lewis, in the World Cup final in Melbourne in 1992, each a definition of “unplayable.” Wasim played five World Cups over his international career, and finished as the second-highest wicket-taker with 55, next only to Glenn McGrath’s haul of 71.

Wasim was the natural successor to Imran Khan as Pakistan’s leader and captain. Wasim also holds the world record for most wickets in List A cricket with 881. He was born into an upper-middle-class family and was brought up in the comfortable suburb of Model Town. His father was a successful businessman, and Wasim was sent to the Cathedral School in Lahore, where his main sporting obsession was table tennis. From age 10 he lived with his grandparents, and his grandfather, a passionate cricket follower, introduced Wasim to the sport. He studied fine arts at Islamia College Lahore, but his success in local club cricket brought him to the attention of the state selectors and the international side. He made his first-class, ODI, and Test debuts within the space of three months at the turn of the 1984-85 season as a teenager, and, barring periods of injury or political upheaval, was thereafter a regular member of the Pakistan side, which he captained frequently before his retirement in 2003.

Wasim captained Pakistan in 25 Tests and 109 ODIs, of which the team won 12 and 66 matches respectively. Under him, Pakistan beat England 2-0 in a Test series at home in 1996 and also reached the final of the 1999 World Cup. He had a successful captaincy stint with county club Lancashire as under Wasim, the team won the ECB Trophy and Axa League and finished second in the championship tournament despite losing only five matches in all competitions throughout the season. Besides his exploits with the ball, Wasim hammered 3717 runs in ODIs and 2898 runs in Tests with a best of 86 and an unbeaten 257 respectively. During his knock of 257 not out — which is the highest score for a No. 8 batsman in Test cricket — against Zimbabwe in Sheikhupura in 1996, he hit 22 fours and 12 sixes, and added 313 runs with Saqlain Mushtaq for the eighth wicket.

Polite and eloquent, Wasim was a great favourite in all parts of the world, most notably in England, where he produced several devastating performances with both bat and ball. Although his staccato run-up and hurried delivery stride betrayed the lack of proper coaching early in his career, his batting, always aggressive and often destructive put him firmly into the all-rounder class occupied by such greats as his mentor Imran Khan, Ian Botham of England, and Sir Richard Hadlee of New Zealand. As a bowler, Wasim was capable of moving the ball late both in the air and off the pitch with subtle changes of pace, and he had one of the most varied arsenals in cricket history, with inswing, outswing, yorkers, and bouncers being just some of the weapons at his disposal. He and his teammate Waqar Younis developed such overwhelming command of their revolutionary use of reverse swing that it prompted allegations of ball-tampering. Even though he retired after the 2003 World Cup, following coaching stints, Wasim continues to entertain fans through his commentary. He is also associated with the Pakistan Super League.