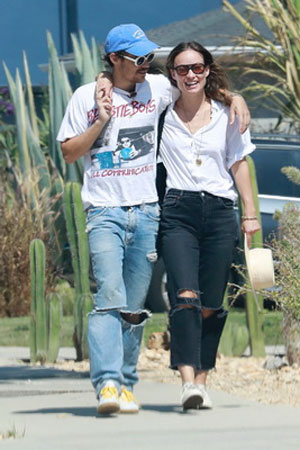 Ciao lovebirds! A blissful Harry Styles and Olivia Wilde were spotted on a romantic vacation in Italy earlier this week. In photos obtained by E! News, the couple stepped out in beach-ready attire as they enjoyed the sights and sounds of the beautiful country.

Harry kept things casual in colour-block shorts and a white T-shirt printed with a sailboat and “Jamaica.” As for Olivia, she sported a white top under a cream-colored jacket, finishing her look in cut-off denim shorts. “Harry and Olivia were very comfortable with each other and looked loved up,” an eyewitness told E! News. “Harry also took time to speak with some fans who recognized him.” In a chivalrous move, Harry also helped Olivia with her bags as they walked up a hill, the eyewitness added.

The couple’s vacation comes before Harry releases his highly anticipated album, Harry’s House, on May 20. It also marks the first time Olivia has been spotted with Harry after her infamous appearance at CinemaCon.

While she stopped by the Las Vegas event on April 26 to promote her upcoming movie with Harry, Don’t Worry Darling, the focus quickly turned when she was served custody papers from her ex Jason Sudeikis while onstage speaking.

A source later told E! News that Jason had “no prior knowledge” about when or how the documents were going to be handed to his ex. The source added that Jason “would never condone her being served in such an inappropriate manner.”

Fortunately, there’s no signs of any drama in beautiful Italy.