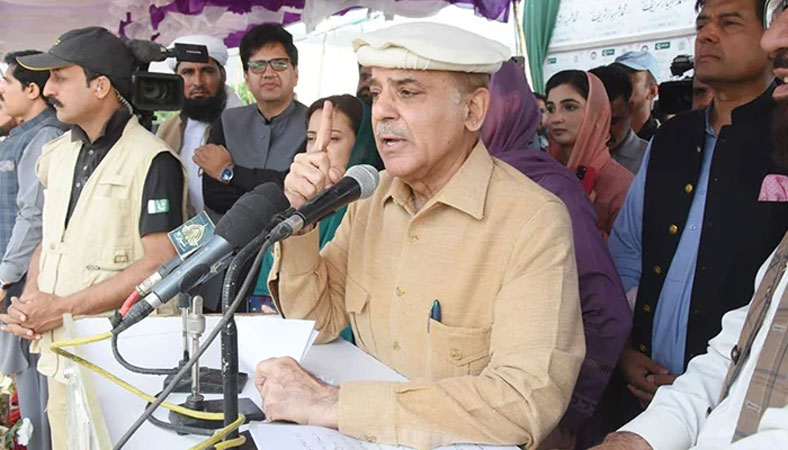 The prime minister, on his twitter handle, said that in the surfaced audio tape, the PTI chief allegedly sought NRO for himself and his previous government. Imran Khan manufactured fake foreign conspiracy story when his other efforts had failed, he added. “The audio tape that surfaced recently exposes Imran Khan’s hypocrisy & double-standard. Contrary to his claims, he sought NRO to save himself & his govt. The fake story of foreign conspiracy was manufactured after all his efforts failed. His lies stand exposed,” the prime minister posted a tweet.

Addressing a public meeting in Mansehra, he said the medical college would be built in the city so that youth could join the medical field. He said Nawaz Sharif constructed Hazara motorway and people remember him as the builder of Pakistan.

Nawaz Sharif laid a network of motorways, including Hazara motorway and Multan Sukkur motorway, under the China-Pakistan Economic Corridor (CPEC) project, he recalled.

Nawaz Sharif worked day and night to put Pakistan on the road of progress and prosperity, he added.

Shehbaz said under the leadership of Nawaz Sharif, Khyber Pakhtunkhwa would also be made a developed province to bring it on a par with Punjab.

He said Khyber Pakhtunkhwa would have to reject Imran Niazi who was arrogant, told lies and took U-turns, adding Imran hoodwinked people and took inflation to the highest level in his three and a half years and there was massive increase in poverty and unemployment.

He said the burden of foreign debts on Pakistan was so huge that the future generation would take years to pay it off.

“[Ex-premier] Imran Khan’s government took such hefty amount of loans that our generations might not be able to pay them,” the prime minister told a public gathering in Mansehra.

Imran Niazi did not fulfill his promise to build five million houses and create 10 million jobs, he said, adding millions of people lost their jobs during tenure of the last government.

He said Nawaz Sharif developed Pakistan while Imran Khan damaged interests of the country. The government would respond to the abuse of Imran Niazi by initiating development projects.

The PM said he had to increase the prices of petrol with a heavy heart but at the same time a subsidy of Rs28 billion per month was given to 85 million people as the government was aware of their problems.

“Every family under the scheme would get a subsidy of Rs2,000 per month on petrol purchase, he told.

He said Imran Niazi in his last days reduced the prices of petrol at a time when the prices were very high in the international market.

Imran knew that he was being ousted from the government through constitutional means so he set a trap for the incoming government, he observed.

He said he would provide 10 kilogramme flour bag for Rs490 in Khyber Pakhtunkhwa if the chief minister of the province did not agree to his request in the next 24 hours to fund the scheme for provision of flour at subsidized rates.

People in Punjab were already getting flour at this rate, he said.

While at the utility stores a 10kg flour bag would be given for Rs400 across Pakistan including the Khyber Pakhtunkhwa province, he informed.

The PM said Imran Khan burdened the country with huge loans which would be paid back by the coming generations.

He said a scheme of free laptops would be announced in the next budget in June for youth who would achieve distinction in the examinations.

Shehbaz said local bodies elections were held peacefully in Balochistan and the voter turnout remained at 30-35 percent which was a very encouraging development.

It proved that people in the far-flung areas of Balochistan had trust in the democratic process and in the environment of security, he added.

Earlier, the prime minister also inaugurated a number of development projects for the area.

Addressing the rally before the prime minister, PML-N Vice-President Maryam Nawaz said the incumbent premier will change the destiny of Pakistan with the support of the people.

She said people had rejected the PTI’s long march, saying “absolutely not”. “He [Imran] used the K-P government’s resources and taxpayers for his party gatherings and rallies which are aimed at spreading anarchy and chaos.”

Referring to the alleged leaked audio tape, she said Imran begged the PPP co-Chairman Asif Ali Zardari to save his government ahead of the no-trust motion.

She also termed Imran’s narrative of foreign conspiracy fake, saying like his mandate his claims was based on lies.

In her concluding remarks, Maryam asked the crowd: “Will you support Shehbaz Sharif for taking tough decisions to fix the country destroyed by Imran Khan…”