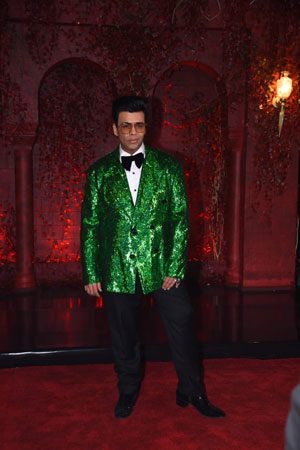 On Wednesday, the filmmaker, who turned 50, wore a green-coloured shimmery blazer that reportedly went in accordance with the theme of black and bling.

Interestingly, several celebrity couples were spotted on an eventful night and set the pulses racing with their ravishing looks.

In the photos clicked by paparazzi outside the venue, first up were Katrina Kaif and Vicky Kaushal, who melted everyone with their adorable chemistry.

The Tiger actress was clad in a white-coloured midi attire with feathers on one of its shoulders, looking “angelic”. While the URI actor looked dapper in an all-black tuxedo.

Another couple that turned heads around was Shahid Kapoor and Mira Kapoor. The Kabir Singh actor looked suave in his white tuxedo whereas his wife was exquisite in a glimmering black dress.

Other than that, Aishwarya Rai Bachchan and Abhishek Bachchan, who recently returned from Cannes Films Festival, appeared regal in their respective attires.

The former Miss World looked stunning in a sparkling golden gown, which she paired with a designer black-coloured blazer. On the other hand, the Guru actor donned a blingy tuxedo coat and looked impressive.

Meanwhile, Saifeena also graced the event with their presence. Keeping up with the theme of Johar’s birthday party, Kareena Kapoor wore a silver, blingy midi-length outfit. Her husband Saif Ali Khan was clad in a white tux with black trousers.