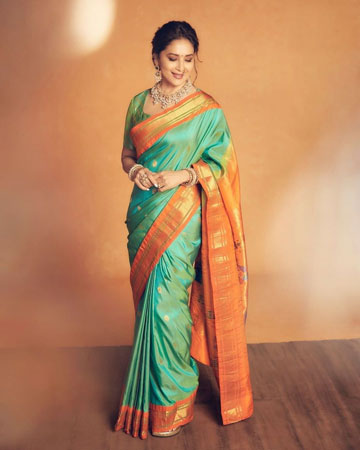 Madhuri Dixit, who ventured into a singing career with Candle in 2020 and recently released her second song Tu Hai Mera, has a number of popular songs picturised on her. She is also among the many women actors who had to wear light outfits- often chiffon sarees, while filming for a song in the freezing cold. Madhuri recently recalled one such experience that she had while filming Pukaar song Kismat Se Tum Hum Ko Mile in Alaska Madhuri was talking about how the actors need to lip-sync most of the songs, along with expressions, unless they are in an unfavourable weather situation, where even moving your lips become difficult. A similar situation occurred when she filmed the Pukaar song on a glacier in Alaska with Anil Kapoor. While Anil wore jeans, a t-shirt and an overcoat, Madhuri only wore a light blue chiffon saree for the song. Asked how did she sing for the camera while filming in the freezing conditions, Madhuri told Bollywood Hungama, “The first evening I couldn’t do it.”