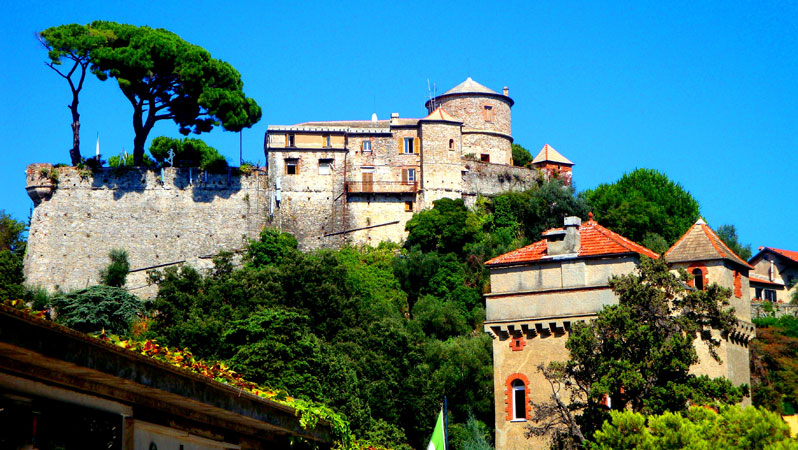 They legally tied the knot at a Santa Barbara courthouse earlier this week after their unofficial nuptials after the Grammys in Los Angeles. And Kourtney Kardashian and Travis Barker will reportedly have a third wedding ceremony at a lavish castle in Portofino, Italy, this weekend.

The newly married couple will celebrate their union at the historic museum Castello Brown, or Brown Castle, located on a hill above Portofino harbour, according to TMZ. Kourtney, 43, and Travis, 46, are believed to have rented out the entire castle, which was built during Roman times as a military fortress, and will be celebrating their nuptials over the next four days.

Castello Brown sits in an elevated position on a rural hill and boasts sweeping ocean views, while the property is surrounded by an array of prestigious villas.

As well as stunning interiors, the castle features a stunning Mediterranean garden filled with flowers and rose gardens, providing the perfect picturesque landscape for an outdoor event. The venue’s website boasts that it is the ideal place for a ‘dream wedding’, while it also hosts civil unions, private events, exhibitions, art displays and meetings.

Translated from Italian, it adds: ‘The Portofino Castle is ideal for planning your dream wedding, a special ceremony or the most exclusive corporate marketing event.’ The property dates all the way back to the Middle Ages, when it was built by the Genoese to defend the Gulf of Portofino, hence its strategically elevated position on the hill.

The first official information about the historic property was in 1425, when Tomaso Fregoso, the ruler of the Republic of Genoa until 1421, occupied Portofino and the castle came under numerous attempts at sieges. The castle continued to be used as a military fortress in battles from the 13th to 19th centuries and in 1500, the building was renovated to include a battery and watch tower. The fortress underwent an array of military renovations during the centuries to ensure it was providing the greatest defence possible for the fishing village.

The sprawling castle has been renovated and expanded over the years by prominent figures including Gian Maria Oliato and Napoleon Bonaparte.

But the castle’s name, Castello Brown, derives from British diplomat Montague Yeats Brown, who owned the building from 1867 until his death in 1905, when it was passed down to his children.

His children took charge of the property until 1949, when they handed it to the Baber family, who transformed the property from a military fortress to a stunning civilian castle. In 1870, Brown, who was based in Genoa and Boston, planted on the main terrace for his own wedding and the two famous pine trees have since become some of the most notable aspects of the outdoor area.

In 1961, Castello Brown was taken out of private ownership and bought by the Municipality of Portofino, which was when it started being used as a museum and a venue to host lavish events. As well as its rich history, Castello Brown has also been used for the filming of the 1991 film The Enchanted April, starring Miranda Richardson and Josie Lawrence.

The interior of the museum is just as spectacular as its sprawling gardens as it features traditional craftmanship and bas-relief sculptures carved into marble and slate. According to Castello Brown’s website, one of the ground floor rooms boasts its original furnishings and is flooded by natural daylight through gothic-style windows.

The staircase features stunning laggioni ceramic tiles while the stairwell boasts a medieval-style wooden coffered ceiling covered with paintings of saints and rulers.

The terrace, where artillery was once housed, now serves as a lavish garden and is popular for tourists to take photographs in due to its picturesque nature.

On the first floor, there is a hall with a ceiling covered in Lombard-type cross vaults which leads off into themed rooms, including the Dolcevita room filled with artwork of people who visited Portofino, such as Winston Churchill and Walt Disney.

Another room is dedicated to cetaceans – aquatic mammals including whales and dolphins – and is a collaboration between the Park Authority of the marine reserve of Portofino and the Aquarium of Genoa.

There is also a circular room filled with stunning aspects of local history, documenting German Kaiser William II’s last visit to Portofino among other intriguing gems. As well as giving visitors an insight into Portofino’s rich history, the room also boasts an 11th century marble bas-relief carving showing San Giorgio killing a dragon, which was restored by the Municipality of Portofino. The castle, which is a popular tourist spot, also features a tower which serves as a historical room where visitors can listen to a video which explains the history of the fishing village. 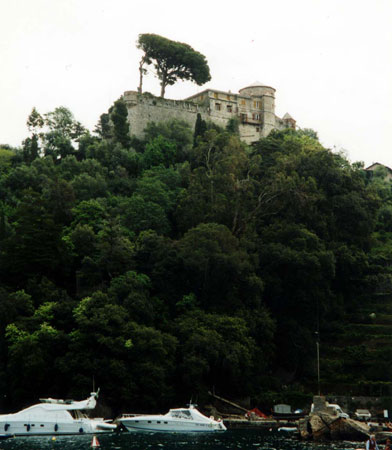 Kourtney and Travis’s reported European wedding at the museum will be the third time the loved-up couple have tied the knot, following their unofficial nuptials after the Grammys in Las Vegas and their legal ceremony in Santa Barbra.

And that is not all as they are also planning another huge reception for their friends back in Los Angeles ‘in the near future’. On Friday, Kris Jenner was spotted in Portofino, bolstering speculation that Kourtney and Travis are set to have an Italian wedding over the coming days. Kris, 66, recently revealed that she had been ‘sworn to secrecy’ about the upcoming nuptials, as she was seen out shopping in the harbour town. A source revealed to People: ‘They had to legally get married first ahead of their big Italian wedding, which is happening very soon.

‘All the details are set, and the whole family, including all the kids, are very excited.’ With Kris telling the publication: ‘I have been sworn to secrecy. If I say one thing about a wedding, I am going to be in so much trouble!’

As well as Kris, Kourtney’s sisters, Khloe and Kim Kardashian and Kylie and Kendall Jenner, Kris’ partner Corey Gamble and her three children will be in attendance. But her former partner Scott Disick – with whom she has Mason, 12, Penelope, nine and Reign, seven – has not been invited. On Travis’ side, his son Landon, 18 and daughter Alabama, 16, will be there, as will his bandmates.

It is believed that Kourtney’s maternal grandmother Mary Jo ‘MJ’ Campbell and Travis’ dad, Randy, are not able to travel abroad for the Italian ceremony, but were present at their legal courthouse nuptials. Kourtney and Travis shared their first photos as newlyweds with their Instagram followers earlier this week. Less than 24 hours after legally tying the knot in Santa Barbara, the reality star posted a slideshow of black and white photos from their big day. ‘Till death do us part,’ the mother-of-four captioned the snaps, featuring her straddling her spouse on top of a black convertible with ‘just married’ on the bumper before getting into the car and sharing a passionate kiss. The Blink-182 drummer posted an identical caption and same images of their big day as they announced the news to their fans and loved ones. The lovebirds, who became engaged in October 2021, exchanged vows with a small number of loved ones and their security, including her maternal grandmother Mary Jo ‘MJ’ Campbell and Travis’ dad Randy, at the weekend. After getting hitched, the reality star and drummer were seen driving off in a vintage car. For her big day, the mother-of-three was seen wearing a short white dress with a plunging neckline and red heart adorned on the bodice and a traditional veil over her dark tresses, which were pulled back for the occasion. She styled her $1,825 Dolce & Gabbana lace bustier frock with a pair of sheer gloves and matching veil.

Known for their love of matching, the star and her husband wore coordinated shoes for their big day. While she opted for a pair of burgundy velvet pumps, Travis matched her in trendy men’s Rockabilly shoes in the same colour.