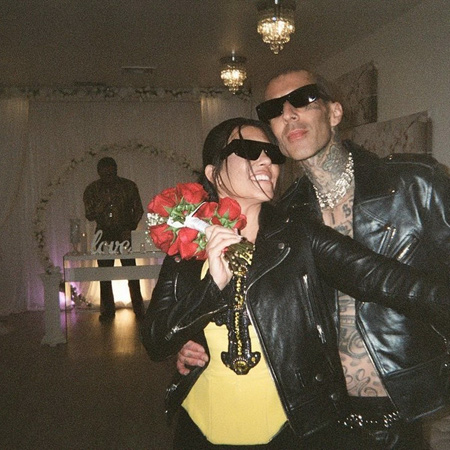 Kourtney Kardashian and Travis Barker have arrived in Italy for their reported wedding. The couple was photographed in the Italian village of Portofino, where the rest of the Kardashian-Jenner clan joined them. Kourtney and Travis’ children from their ex-partners Scott Disick and Shanna Moakler were also spotted. The reality TV star wore a sheer and red velvet outfit for the special outing. It was previously reported that the couple got legally married in Santa Barbara, US, prior to their big Italian wedding. On May 16, both Kourtney and Travis shared their black-and-white wedding photos on Instagram and captioned them, “Till death do us part.”

Kourtney’s sister, Kim Kardashian, was seen arriving for a family dinner ahead of the wedding of the Blink-182 drummer and the reality TV star. Kim wore a dark grey outfit. Other family members, including Khloe Kardashian, Kendall Jenner, Kylie Jenner and Kris Jenner, too joined the couple for their intimate pre-wedding gathering. Notably absent at the festivities in Italy were Kourtney’s ex Scott Disick and Kim’s ex-husband, singer Kanye West.

Kourtney and Travis legally married on May 15 in Santa Barbara. According to People, they wed in front of a few close friends and family. “They had to legally get married first ahead of their big Italian wedding, which is happening very soon,” a source was quoted telling People.

Kourtney and Travis have made several public appearances in recent weeks. They attended Oscars 2022 wearing matching all-black outfits in March. In April, the couple appeared at the Grammys in Las Vegas. Following their Grammys appearance, the two reportedly had a wedding ceremony, which had an Elvis Presley impersonator in attendance, at the One Love Wedding Chapel in Las Vegas. Following the reports of their Vegas wedding, Kourtney shared photos from the spontaneous outing and clarified that the wedding was a practice run.

“Once upon a time in a land far, far away at 2am, after an epic night and a little tequila, a queen and her handsome king ventured out to the only open chapel with an Elvis and got married. Practice makes perfect,” she wrote. Prior to Travis Barker, Kourtney Kardashian dated model Younes Bendjima for three years. She and ex Scott Disick also share three children: Mason, Penelope and Reign. Travis was previously married to Shanna Moakler, and the two have three children together: Atiana, Landon and Alabama.