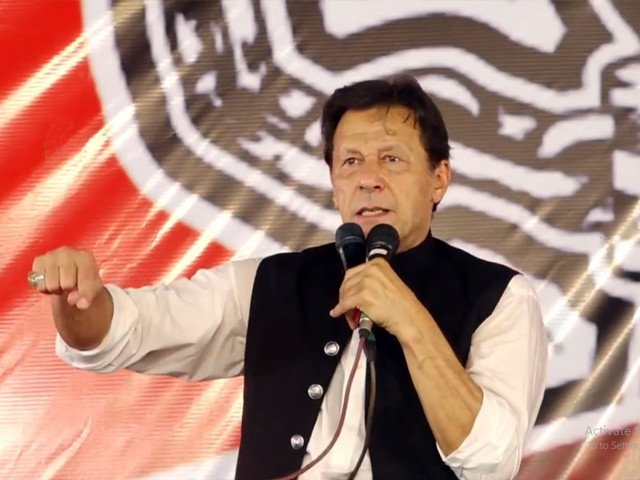 PTI Chairman Imran Khan is addressing a public gathering in Multan, where he is expected to share details of his long march to Islamabad. In his address, the former prime minister thanked the people of Multan for giving him a warm welcome. He added that he used to pray that the Pakistani nation awakens so it does not bow down before any mafia and superpower. He added that this wish of his has been fulfilled his dream during his lifetime. He also thanked the woman and youth for attending his rally, adding that no revolution is “successful” till women and youth take part in it.

The former prime minister said that fear of losing a job and humiliation “makes a big man into a small one”. He added that till such the shackles of such fear is not broken the country will not turn into a great nation.  The PTI chairman added that Prophet (PBUH) helped Muslims break those shackles and helped them rule the world. To give more examples he explained that no one turned into a big businessman till he feared losses, no soldier has gotten medals in fear of death. Khan said that when Edmund Hillary decided to climb the Mount Everest he first conquered his fear. Similarly, the “corrupt” rulers imposed on the country have imposed this fear that till we do no polish the America’s boots we cannot progress, he added.

The PTI chairman deplored that the country unfortunately got rulers that mostly bowed down before the US. He added that this bought bad repute to the country.

Khan continued that the Opposition during his premiership tried to conspire against him so that he is forced to forgive their corruption cases and give another “national reconciliation order”.

“If I would have forgiven their cases then this would mean that I did not come to power based on an ideology or to run a movement for justice. It would have meant I came to do politics over a seat just like Gen Musharraf forgave them to save his seat,” said the PTI Chairman.

Turning his guns towards his arch-rival PML-N, the PTI chairman asked its supporters if they have ever wondered how a “jackal” can ever become a leader.

Khan, while citing Asif Zardari, said that when former dictator Musharraf put Nawaz Sharif in jail he finished the tissues by wiping off his tears.

The former prime minister siad that his government was told that Nawaz was very ill when he was jailed. He added that many people, including Shireen Mazari, told him to send him for treatment.

“[However,] when he boarded the plane a new Nawaz Sharif came. The illness was gone, he climbed the stairs as If he was training for the Olympics,” said the PTI chairman. He added that the PML-N supremo turned into politician as soon as he reached London.

“Tell me PML-N how can you walk behind such a person,” asked Khan.

Turning towards PM Shehbaz Sharif, the former prime minister said that the coalition government is so weak that it is calling for a National Security Committee meeting to determine the price of petroleum prices.

“[They are doing this] so the blame for rising prices falls on the Army,” said the PTI chairman.

In his address, Khan asked the people of Multan why so many “lotas” had emerged from South Punjab. He also said that he was thankful that MPAs who had voted in favour of Hamza Shehbaz were disqualified.