Nation will seek justice if I am killed: Imran 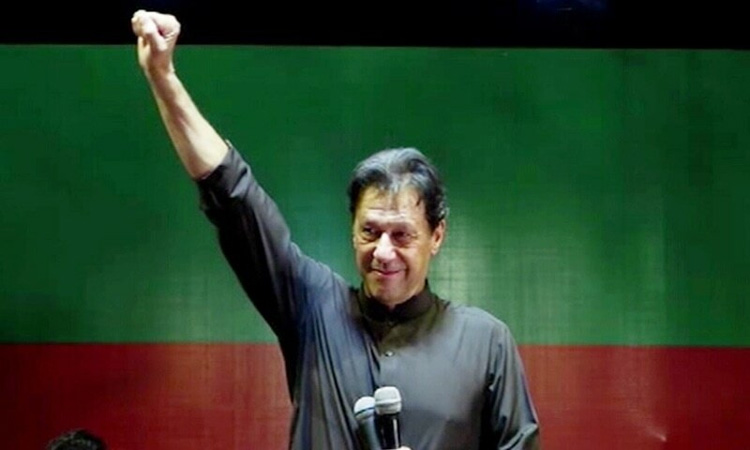 PTI Chairman and former prime minister Imran Khan on Sunday said that if anything happened to him, the Pakistani nation will seek justice on his behalf.

Addressing a rally in Faisalabad, Imran Khan reiterated that his life was under threat and that he had recorded a video message to be released in case he is killed.

“I’ve recorded a video because I know Pakistan’s history. It tells us our justice system can’t apprehend powerful criminals, so I leave it to the people. If something happens to me, then the nation will have to get me justice,” Imran said at a huge public rally in Faisalabad. “Will you do it?” the PTI chairman asked a charged crowd.

“You have to make two promises with me. If something happens to me, then those I name in the video, you have to stand up to them and ensure they are taken to court so that the first time the powerful will face the law.”

He also asked the crowd to make a pact that they would “never accept slavery” and “never vote for a party whose leaders’ money is stashed abroad”. Such politicians, he said, could not be depended on to safeguard the country’s interests since their possessions were abroad and their priorities lay elsewhere.

Reiterating his belief that there was a US-backed plan that made the no-confidence motion against his government successful, Khan said that he already knew that plotting related to his ouster was taking place behind closed doors. He then questioned the incumbent coalition government whether it was capable enough to take care of the prevailing situation, referring to the rising price of the dollar against the Pakistani rupee and the ensuing inflation in the country.

“I ask the media of the country to inquire from a common man the rates of potatoes and tomatoes,” he said. He then went on to say that owing to the rife corruption in the country, no big criminal was ever arrested.

“We are yet to find out who was behind the assassination of Liaquat Ali Khan,” he said and repeated how US Assistant Secretary of State for South and Central Asian Affairs Donald Lu had threatened the Pakistani ambassador of “consequences” if Khan wasn’t removed from power.

Khan also criticised Foreign Minister Bilawal Bhutto-Zardari and said that since he is now going to meet United States Secretary of State Antony Blinken, he will “beg him for money” so that “Imran Khan could not come back into power.”

The former prime minister claimed that Blinken knows well where Bilawal and his father, Asif Ali Zardari, have stored their money across the globe. “Since all of Bilawal’s wealth is stored outside of the country, he cannot dare to upset the US, otherwise he will lose everything,” Khan said. Khan said that the United States never helps any country without seeing its own interest.

“The US will tell Pakistan to stop talking about Palestine,” he said, adding that the US cannot dare to dictate to India because it was a free country. “The US has made Pakistan a slave without having to invade it,” Khan said. “The people of Pakistan will never accept the imported government”.

Imran Khan reiterated that a conspiracy was being hatched to kill him. “I got to know few days ago that a conspiracy was being hatched against me behind closed doors… conspirators are confused now as to how to get rid of me,” he said. Imran, without naming anyone, said they thought my government would fall during economic and Covid-19 pandemic crises but it overcame all challenges. This rally is part of his party’s so called ‘real freedom’ movement against coalition government led by PML-N.

The PTI chairman said those who removed him from power expected that people would celebrate his ouster. “But instead of distributing sweets people took to street to protest against [my removal,” he added.

Amid fears that a “sea of people” would march on Islamabad, ‘conspirators’ concluded that only way to do away with me is to take my life, he added.

Lashing out at Prime Minister Shehbaz Sharif and Punjab Chief Minister Hamza Shehbaz, Imran lamented that under-trial individuals occupied such high offices, which he said amounted to “disrespect the nation”.

He alleged that as soon as Shehbaz took charge as the prime minister, he removed all Federal Investigation Agency officers who were pursuing the money laundering case against him and his sons.

Imran also repeated his claim about the circumstances surrounding the death of former FIA director Mohammad Rizwan, who was probing money laundering charges against him.

Imran Khan said that the “government of theives” was imposed on Pakistan not only due to a ‘foreign consipracy’ but also due to internal Mir Jaffars. He then asked the participants of the rally if they were ready for marching on Islamabad.