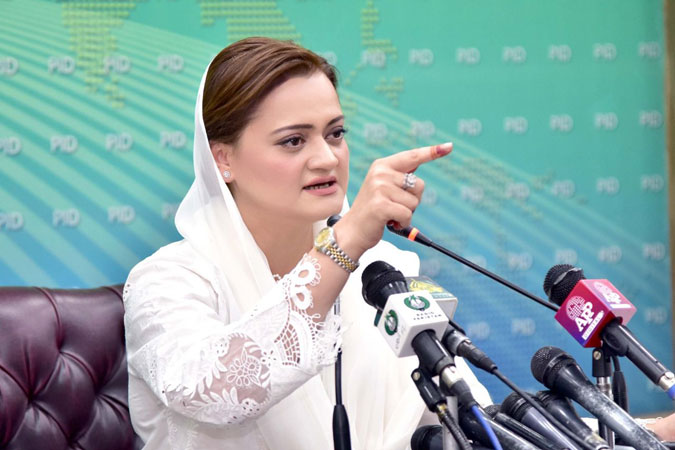 Holding former prime minister Imran Khan responsible for the current economic catastrophe and US dollar’s unprecedented flight against the rupee, Minister for Information and Broadcasting Marriyum Aurangzeb Friday said the PTI regime plunged the country into a quagmire of problems.

Reacting to the statement of PTI leader Fawad Chaudhry, she said Imran was squarely responsible for the US dollar’s historic flight against the Pakistani rupee.

The minister said Imran Khan signed an agreement with the International Monetary Fund (IMF) due to which the people of Pakistan were facing high inflation.

The minister said the people faced “economic terrorism” in the country due to inefficient and competent Imran government and cartels and mafia raj for nearly four years.

The current economic instability is the outcome of Imran’s policies, she said, adding that in the case of petroleum, the former PM had done an irreparable damage to the economy only to divert attention from his failed politics.

“Imran sahib is responsible for difficult decisions being taken now”, she said and added that the PTI chairman had (once again) climbed on the container to cover up his anti-people economic crimes. She reminded Imran Khan that putting the country’s economy and people’s future at stake for political purposes was tantamount to treason. Marriyum said that it was ironic that PTI regime’s incompetence and bad economic policies were the reason behind the inflation being faced by the people, but now they were making the noise about inflation. She advised Imran Khan that instead of making hue and cry, he should hold himself accountable for inflation and economic crisis.

Four years of incapable, inefficient and incompetent rule accompanied by cartels and mafias carried out economic terrorism against the people.

“If tough decisions are being taken today, then Imran Khan is responsible,” she said, adding that the PTI chairman was now sitting on a high horse in an effort to hide his “anti-people economic crimes”. She said Imran was making a ruckus about inflation when he was responsible for it and asked him to give an answer for the economic destruction he had caused.