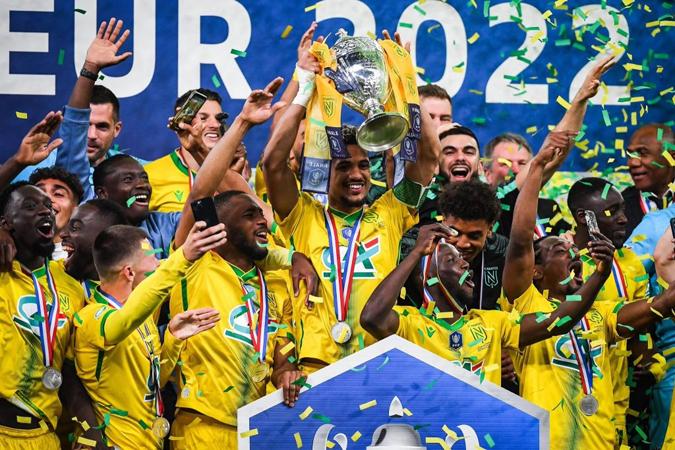 PARIS: Nantes won the French Cup for the first time in 22 years on Saturday, beating Nice 1-0 in the final at the Stade de France. Ludovic Blas drilled home a penalty at the start of the second half to bring Nantes the club’s first major trophy since winning the Ligue 1 title in 2001. “Never in my wildest dreams did I imagine I would coach Nantes and win a trophy,” said Antoine Kombouare, an ex-Nantes player who was the first coach sacked by Paris Saint-Germain following the Qatari takeover. “We came from nowhere. We could have finished in Ligue 2 last year. Now we’re going to play in the Europa League and the Champions Trophy, it’s hard to believe. “It’s incredible, almost a miracle.”

Nantes, who only avoided relegation in a play-off last season, lifted the French Cup for the fourth time and qualified for Europe for the first time in two decades. For much of the season, Nice, owned by Ineos, the group chaired by Monaco-based British petrochemicals billionaire Jim Ratcliffe, looked certain to qualify for the Champions League but after a recent stumble could miss out on Europe altogether. “It’s disappointing. When you get to the final and have this magnificent trophy, you do everything to try and win it,” said Nice coach Christophe Galtier.

After the two finals played in an almost entirely empty stadium due to the pandemic, a sell-out crowd of around 80,000 packed the Stade de France – roughly two-thirds Nantes supporters. Nice knocked out PSG and Marseille en route to a first final since 1997, but struggled to create chances with Amine Gouiri and Kasper Dolberg both without a goal in the league since January. Nice goalkeeper Marcin Bulka, the PSG loanee who helped dump out his parent club on penalties in the last 16, smothered well as Blas darted into the box, with Gouiri then having a shot deflected wide in a gritty first half. A first final without PSG since 2014 burst into life 15 seconds after half-time when Hicham Boudaoui was harshly penalised for a handball by Stephanie Frappart, the first woman to referee a French Cup final. Blas hammered the resulting spot-kick straight down the middle past Bulka, sparking euphoric celebrations from the Nantes players and fans.