Islamabad long march a bid to ‘save’ Farah 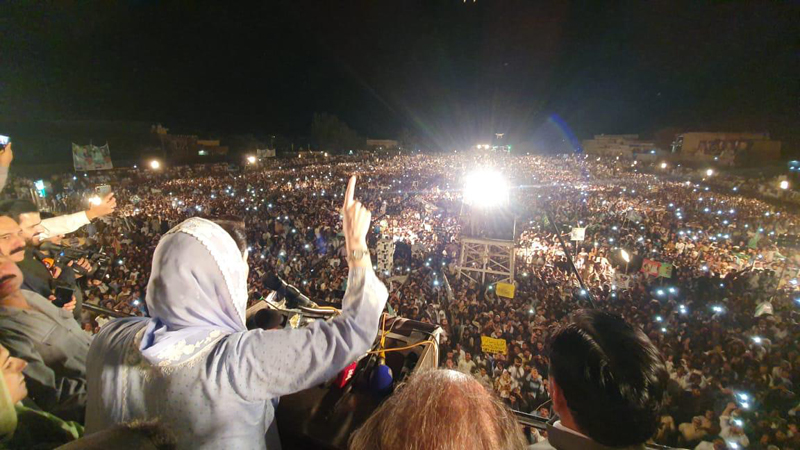 PML-N Vice-President Maryam Nawaz on Friday dismissed allegations by former premier Imran Khan that a “foreign conspiracy” was hatched to topple his government, saying the letter the PTI chief had been referring to as evidence “does not even exist”.

Addressing a public gathering in Fateh Jang, Attock, Maryam said Imran had “lost his mental balance” after losing power in the wake of the no-confidence motion.

The PML-N leader hit out at the ex-PM for his plan to march towards Islamabad, saying Imran’s actual aim was to save Farah Khan – a close friend of his wife Bushra Bibi – against whom the National Accountability Bureau has begun an ‘assets beyond means’ inquiry.

“As soon as Imran realised the impending success of the no-trust motion, he paved the way for Farah to leave the country within a day.”

She asked why Farah left the country if her real estate business was thriving and flourishing in the country, as Imran had claimed. She hinted that Interior Minister Rana Sanaullah would take measures to bring the woman to the country to face corruption charges.

She accused the ex-premier of “repeatedly changing his narrative” about the conspiracy, saying “first he asserted that the letter was received in March and just a day ago he disclosed that he was aware of the plot since July [last year]”. Maryam questioned Imran for raising hue and cry on his exit, reminding him of his previous statements wherein he had said he was happy that the opposition submitted the no-trust motion against him. “Now that the no-trust motion has succeeded, people must ask Imran why is he raising objections?”

At the rally, Maryam said the Imran’s government was supported by “crutches” which were destined to collapse. PML-N has been accusing Imran and the PTI government of using Farah as their “frontperson” to secure bribes in different projects on behalf of the ruling elite. Maryam also alleged that Imran was more annoyed at Shehbaz becoming the prime minister than his own ouster.

Maryam said that the ex-premier’s government “fell soon after getting bay-Faiz”. She was referring to former Inter-Services Intelligence (ISI) chief Lt Gen Faiz Hameed about whom Imran Khan, during a podcast on Thursday, said that he wanted him to continue as head of the country’s premier spy agency.

The PML-N leader said that the former premier’s government fell immediately after getting “bay-Faiz”. “Sometimes he cries about conspiracy, sometimes he cries about the letter… Now, he will seek money on roads by showing that letter,” she said and added that the former premier lies every day. “He [Imran Khan] said the letter was delivered in March but now he says he knew about the conspiracy since July,” she added.

Maryam said that Prime Minister Shehbaz Sharif is exposing the inabilities of Imran Khan to the nation each day. “Imran Khan did not work himself nor did he let anyone else work,” she added. She also said that the PTI chief shut down the electricity power plants installed during the tenure of PML-N. “When Usman Buzdar departed after ruling for four years, there was no electricity in Punjab. The PTI said there was no need for the power plants … if there was no need why did we have loadshedding,” she questioned.

Maryam said that Imran Khan himself designated Chief Election Commissioner but now he wants him to resign. “He will not resign and Imran will be held accountable for his actions,” she added.

Criticising PTI for allegedly planning unruly incident in Madina, she said that Imran Khan has become so mad in political rivalry that he sent people to organise campaign against Shehbaz Sharif in the holy city, adding that PTI workers abused Information Minister Marriyum Aurangzeb.

“Sheikh Rashid’s nephew was arrested at airport and when he was asked about his phone he said he left it in Saudi Arabia. If the authorities had confiscated that phone, it would’ve revealed many stories about Bani Gala,” she further said.