* Nawab is very proud of his ancestors 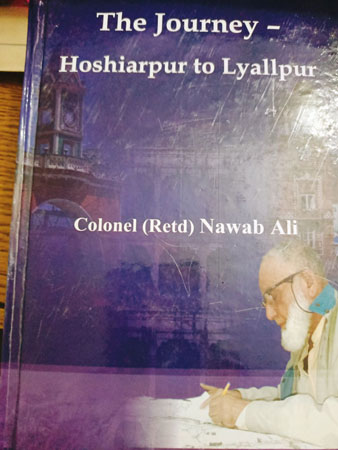 As per the title this book, it is all about the journey of Colonel (r) Nawab Ali from Hushiarpur to Lyallpur.

Naturally it entails the life history of Nawab Ali based on his migration to Pakistan, before and thereafter. This autobiography comprises work in Urdu and English. Both portions are intersected by a map of the area he hailed from and photographs with family and friends. On the English side Nawab Ali gives the historical background of his native village in Hushirapur District. Pandori people were linked with Gardhiwala. Rao Kabir of clan Sheena Hotey lived in Gardhiwala but left to settle in a deserted village Mehlanwali. The tribe worked hard to make the Land cultivated. Seeing this improvement the original dwellers Kabiri Rajputs decided to return. Not welcomed they opted for menial jobs but planned revenge by arranging a festival for Jaat Clan, murdered them and buried their dead body in a trench. Colonel Saheb then goes on to give the present state of these villages. The next chapter discusses dynastic continuity. He pays tribute to the police stations in District Hushiarpur in poetic form on Page 4 (Urdu). Many stalwarts pay tribute to Col. Nawab Ali in the beginning of the book notable being Dr. Abdul Qadeer Khan, Mujib ur Rehman Shami, Atta ul Haq Qasmi, Dr, Ajmal Niazi, Brig (R) Muhammad Yousuf, Muhammad Farooq Azmi, Professor Abdus Sattar and Allama Abdus Sattar Azam, the publisher.

Nawab is very proud of his ancestors. He informs that his father’s name was Shah Muhammad and grandfather’s name was Maula Bukhsh. Nawab had two brothers Sardar Ali and Mukhtar Ahmad. Sardar Ali joined Armed Forces and rose to the level of Lieutenant General. This reviewer met him when he was heading Pakistani contingent of Army in Riyadh, Saudi Arabia in late 1980s/early 1990s. Nawab hailed from Jatt Clan. Nawab was the first officer in his family to have joined Army. He was the first person in his village to have gone for formal studies. The next chapters describe the struggle and help of a Sikh friend Munshi who accompanied the family and escorted them to Wagha Border in 1947. The family went to Shahdara from where they decided to leave for Faisalabad where Nawab’s uncle had some friends who had come from Dholenwal and Phalahi for settling in Lyallpur.

Rest is the details of how the family settled and got some Lands and house in Claims. In 1947 Nawab’s father found his family as he had some job with a Parsi family in India and they started living together again. Nawab got admission in Islamia high school, Sheranwala Gate where the headmaster provided Nawab books and copies as well. Such details are important for our younger generations to read to appreciate how their ancestors struggled to cross the borders and reach Pakistan in safe Heavens. In Lahore the general understanding was that Government College was for the affluent people and Islamia College for the Poor. Nawab was the second position holder with 678 marks in Matriculation and opted for non-medical group in Islamia College. In parallel he joined University Officers Training Course where he got some idea about ARMY (Page 59). Then he passed written test and cleared Inter Services Selection Board to reach PMA from where he received BSc degree (Page 59).

Nawab recalls the tough times spent in PMA. At the end of Junior Term 1, he was given admission in Senior Science Course 1 which enabled him to get admission in Government College of Engineering and Technology, Lahore (which was later converted as UET, Lahore). Four cadets received BSc Electrical Engineering degree in 1959. The first batch of EME was sent to Australia for Practical Training. Nawab is very specific in giving details to who received this batch in Sydney. The batch stayed there for a couple of days and then was moved by train to Albury Station, from where the batch was sent to Bandiana through Wadonga city. The Officers Mess took care of Halal meat and Ramzan timings requirements of the Muslim guests. Nawab made friends with Sheep farmer Desmond Martin who took pains to let Nawab ride his horse. Nawab arranged a sword made in Sialkot City which Martin needed for ANZAC Day. When Martin expired in the year 2000, he had informed his family that when Nawab visited Australia again, he would be welcomed. When Nawab went for condolences in December 2000, he was treated as a family member. Nawab remembers his stay in Australia very clearly (Page 52-English). Nawab gives the details of his first training Royal Australian Electrical Mechanical Engineering workshop in Bandiana. Training in Sydney was attachment with small arms manufacturing industry in the city of Lithgow. Lack of hotel accommodation made him stay with Rick Tonkin family. He got a chance of having a firsthand experience of living with an Australian family.

Apart from these details such autobiographies or novels also go into the details of cultural and socio-economic conditions of the countries at the time span in which these were penned. For instance according to Wikipedia Leo Tolstoy, the writer of Russian novel said War and Peace is “not a novel, even less is it a poem, and still less a historical chronicle”. Large sections, especially the later chapters, are philosophical discussions rather than narrative. Tolstoy also said that the best Russian literature does not conform to standards and hence hesitated to call War and Peace a novel. Instead, he regarded Anna Karenina as his first true novel.

Nawab Ali gives details of the Agriculture Census when he was Commissioner (Page 65 – English Version). After his retirement from the Armed Forces he joined as Commissioner of Agriculture Census. After joining he did not come across an ideal situation in his new assignment. He took pains to address the genuine grievances of the workers. Agriculture Census was just one job of ACO. Livestock, Village, Agriculture Machinery and the related census were part of their purview. A proper procedure and working system existed to carry such census.

Nawab includes exchange of letters with his family, the Aussie Connection, friends from UAE, Turkey and USA and the other officials of the offices he worked in. For example it includes an addendum from his son Muhammad Aamir who names his father as Muttaqi – Page 259. Nawab’s brother Lt. General (r) Chaudhry Sardar Ali was born in village Pandori Kad, Distict Hushairpur in undivided India on March 06, 1937. He reiterated that after Pakistan came into being he too moved to Pakistan and settled in village Chak Number73/RB Khurianwala, District Lyallpur. He joined Pak Army in May 1958. After serving Pak Army for 36 years, he retired on March 5, 1994 as Lt. General. Presently both brothers live in two separate houses but joined by a door from inside in Cavalry Grounds, Lahore Cantonment.

Colonel Nawab Ali’s autobiography invites the readers to the ambition of villagers to get education and excel in their fields of interest by sheer hard work. Their love for the family members; elders and younger lot exemplify the need of learning and sincerity to their work by the younger generation. It also leaves behind the memories of cohesiveness developed by Nawab Ali through remaining in touch with the foreigners with whom he spent time abroad.