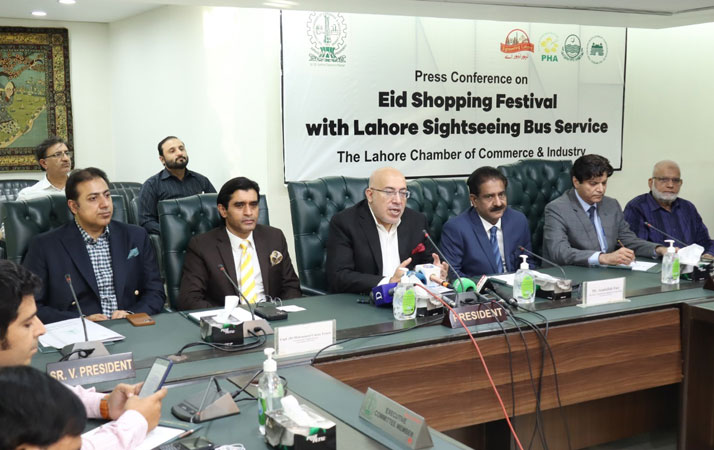 A joint venture of the Lahore Chamber of Commerce & Industry, Tourism Development Corporation of Punjab and Commissioner’s Office “Eid Shopping Festival” would be held from April 28th to May 2.

Briefing the media on the “Eid Shopping Festival”, Mian Nauman Kabir said that the prime objective of the LCCI-TDCP mega event is not only to help revive the trade and economic activities but also to highlight the soft image of the country. He said that the event has been designed in a way that it would send a very positive signal to the outer world.

The LCCI President disclosed that the “Eid Shopping Festival” encompasses a range of business and cultural activities including Shopping Rides, Discounts on Shopping in Anarkali, Liberty, Mall Road and other city markets, Special Gift Coupons, City sighting at night, Qwali night and various other events. He said that the very objective of the Eid Shopping Festival is to expedite the business activities in this part of the country.

Commissioner Lahore Captain (R) Muhammad Usman thanked the business community for supporting such ideas. He said that this project would be continued and more markets would be taken on board.

Secretary Tourism Development Corporation (TDCP) AsadullahFaiz said that the TDCP is introducing new trends in the tourism and hospitality industry. He hoped that “Eid Shopping Festival” would be a great success. He said that sightseeing Lahore bus service shall take to the shoppers Liberty market, Main Boulevard Gulberg, Mall road, Anarkali Bazar and Packages mall. He said that tourism should be seen as an economic, financial and cultural implication as well as a special expression of social life, through which we can produce results that benefit society.

To ensure this, TDCP is expeditiously implementing a comprehensive strategy with a vision on tourism, which will make Punjab a hub for national and international tourism in the days to come.