Get ready and wait for my call to Islamabad, says Imran Khan at Lahore jalsa 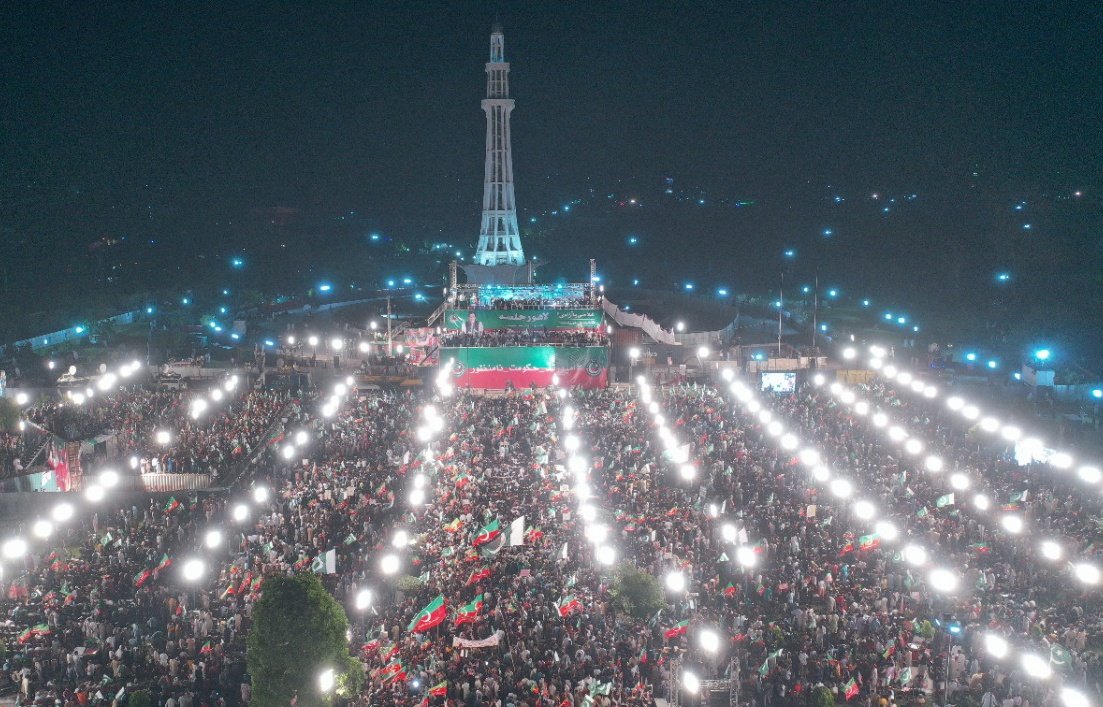 LAHORE: Imran Khan, chairman of the Pakistan People’s Party, urged Pakistanis Thursday to prepare for a campaign for “actual independence” and await his call to Islamabad, as the ousted premier emphasised he would not accept the “imported government” at any cost.

“The actual party has only begun; our campaign will intensify in the coming weeks […] await my call. I want nothing else but early elections,” the former prime minister told the Lahore jalsa, appealing to “those who made an error.” “early elections to be held.

Khan urged PML-N and PPP supporters to join the PTI, claiming they were unaware of the foreign plot against his government.

The chairman of the PTI stated that his party is a democratic force that seeks democratic solutions. “Those who have made an error, now is your chance to call early elections.”

Additionally, he administered an oath to the attendees:

“However, I want to be clear that I am not interested in creating conflict. This is my country, and there are no other options […] Pakistan is where I will live and die “Chairman of the PTI stated.

Khan reiterated that Pakistan would have been divided into three parts if it did not have a strong army. “Had our military personnel not made such selfless sacrifices, our situation would have been comparable to that of Syria and Iraq.”

Accusing the incumbent government of buying lawmakers’ consciences and “polishing the boots of foreign powers” in order to remove him from power, the former prime minister claimed.

Khan went into detail about why a “foreign conspiracy” was hatched against him, stating that his goal from the day he took office was to give Pakistan an independent foreign policy.

“A self-governing foreign policy entails that all decisions are made in the public interest. I cannot put my countrymen at the mercy of a foreign power “According to Khan,

According to the PTI chairman, incumbent rulers were always obedient when foreign powers issued directives, but he did not follow suit, and thus foreign powers “did not like it.”

Khan also resolved to raise the issue of Islamophobia at every international forum — the United Nations, the Organization of Islamic Cooperation, and others — because a strong 1.5 billion Muslim population was being persecuted in other countries.

“So the foreigners felt the same way,” he explained.

Thirdly, the foreign powers despised his attitude of “refusing to take orders from anyone.” The ousted premier claimed that his visit to Russia was questioned by a foreign power.

To justify his visit to Russia, the PTI chairman stated that Moscow was willing to sell Pakistan petroleum products at a 30% discount to international prices.

We could sell petrol and Fazlur Rehman (diesel) at a 30% discount,” the former premier joked, referring to the JUI-F leader, whose party is a partner in the ruling coalition.

Khan stated that foreign powers were not pleased with his increasing trade with China.

“Due to their dissatisfaction with all of these factors, a plot was devised. However, no conspiracy can succeed in the absence of the support of Mir Jafars and Mir Sadiqs “‘I am no longer a prime minister,’ the deposed leader stated.

Khan asserted that his government was ousted at a time when the country was advancing, with remittances, tax collection, and development at “historic levels.”

“We were ahead of everyone; unemployment was at an all-time low. Additionally, our government handled the coronavirus admirably, preserving lives and jobs for our impoverished citizens,  ” according to Khan.

Referring to the Toshakhana controversy, he stated that during previous governments, leaders would purchase items from the Toshakhana at a discounted rate of 15% of the original price.

“However, when we took office, we increased the rate to 50%, with the proceeds going to the government. Everything I purchased is documented, and I acted legally,” according to him.

Khan stated that he paid for the road repair outside his house out of his own pocket and did not use government funds. “I’m self-supporting.”

In a scathing attack on the incumbent government, the PTI chairman claimed that no other prime minister in Pakistan’s history has spent less money on himself.

The PTI has decided not to cooperate with the commission investigating the letter-gate scandal.

Khan pleaded with the judiciary to protect the officers charged with investigating Prime Minister Shehbaz Sharif and his son Hamza Shahbaz’s corruption cases.

According to the PTI chairman, no government official would take action against the prime minister or his family because of the positions they now hold.

“Isn’t it the courts’ responsibility to protect these officers?”

The ousted prime minister stated that he attempted to advance cases against the then-opposition during his administration but was unable to do so because the National Accountability Bureau (NAB) and the Federal Investigation Agency (FIA) were not under his control.

“The NAB was not subordinate to me, and the courts were independent […] apart from their FIA cases, what else could we have done? And those in positions of power did not view corruption as a negative thing, ” the Chairman of the PTI stated.

Additionally, the ousted premier rejected Prime Minister Shehbaz’s proposal to establish a commission to investigate the letter-gate scandal, stating that the PTI would only follow Supreme Court directives in this matter.

Prior to Khan’s announcement, former Interior Minister Sheikh Rasheed stated that the PTI chairman’s fight against the incumbent government would continue and that he would support him to the bitter end.

Speaking about security threats against Khan prior to the event, Rasheed warned: “If a single hair on Imran Khan’s head is harmed, the country will descend into civil war.”

The former interior minister stated that individuals from all over the world demonstrated in support of the PTI chairman following his ouster via a vote of no confidence.

Rasheed stated that he would organize public rallies against the PTI’s dissident members. “I am in politics to represent the world’s 220 million people,” he continued.

‘Choose your own course of action’

PTI Vice-Chairman Shah Mahmood Qureshi, for his part, stated that his party defeated both the PPP and the PML-N over a seven-year period. “PTI won a historic victory in 2018.”

“It is up to you whether you would rather live as slaves or with your heads held high,” Qureshi stated.

Referring to Khan’s assertion that the incumbent government is backed by the US, Qureshi stated that the country must decide today whether future Pakistani decisions will be made in Islamabad or Washington.

He continued by stating that the intentions of his party were “clear.”

PTI alleges that roads have been closed and internet access has been cut off.

The PTI accused the government of blocking “all” roads leading to Minar-i-Pakistan and cutting off internet service during the jalsa.

Only a day ago, the PTI chairman spoke at a Twitter Spaces session — by far the largest in Pakistan — on a variety of topics, including the election commission, former aides, and the letter-gate controversy.

Meanwhile, Prime Minister Shehbaz Sharif has ordered the provision of foolproof security to Khan in light of today’s PTI rally in Lahore.

According to a statement released on Twitter by the Prime Minister’s Office, the premier has directed the Interior Division to take appropriate action.