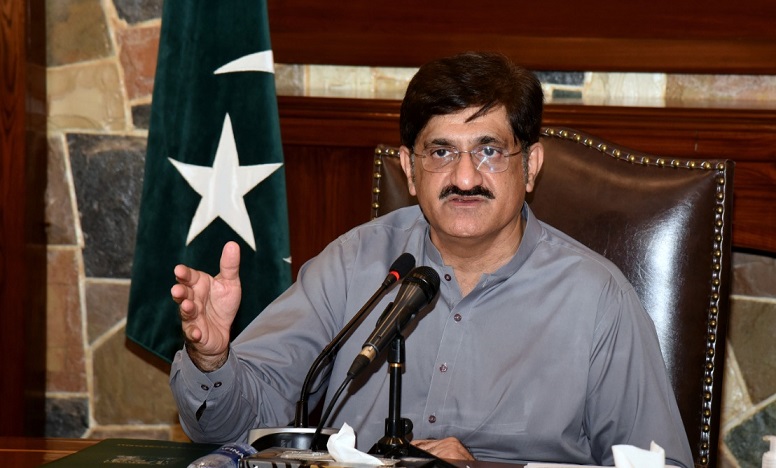 Sindh Chief Minister Murad Ali Shah admitted on Thursday that the response to the village fire in Dadu district on April 18 was “very slow” and vowed to punish whoever was responsible. Nine children were burnt to death and more than 20 other men and women suffered severe burns when a fire raged through Faiz Mohammad Daryani Chandio village and reduced all 50 houses and everything present inside to ashes. Around 150 buffaloes, cows, goats and other animals also perished in the fire.

In two other similar incidents of fire within the district, over 60 houses were destroyed and dozens of animals perished. Talking to the media in Islamabad today, Shah said the fire brigade of the municipality closest to the village — which is located some 30 kilometres from the Mehar town of Dadu district — was damaged because of which fire tenders had to be mobilised from other areas.

“I admit that the response was very slow and whoever is responsible [will be punished]. Our job is to provide immediate relief to people.”

Shah also shared that at his instruction, the chief secretary formed a committee under the supervision of the home secretary to determine the reasons behind the delayed response. “I have given [them] three to seven days to present that report. Whoever was responsible will be punished,” he insisted.

Shah said the provincial government would rebuild all the houses damaged by the fire, adding that the special assistant of the Shaheed Mohtarma Benazir Bhutto Housing Programme had also visited the village.

In addition, the provincial government would also provide compensation for the lives and animals lost, he said, vowing to “look after them (affected people) completely”. He shared that he called on Prime Minister Shehbaz Sharif earlier in the day, adding that the premier announced the federal government would contribute Rs10 million for relief efforts.

Separately, Prime Minister Shehbaz directed authorities to conduct a complete investigation into the incident. The premier, who was presented a preliminary report on the tragedy, also vowed to take strict action if anyone was found to be negligent in the dispensation of their duties. At the prime minister’s directives, an amount of Rs10m was released for the heirs of the deceased as well as those injured in the incident. The prime minister instructed the district government to extend all possible support for the rehabilitation of affected families.

The whole nation shared the grief of the families who had lost their loved ones, he said. The prime minister called upon the district administration to take solid measures to prevent the recurrence of such incidents in the future.

According to the affected families, the blaze started at around 9pm on Monday and raged through the village, falling within the jurisdiction of the Faridabad police station, over the next 12 hours. No fire tenders reached the village until it subsided at 8am in the morning, the villagers said. The blaze caused significant losses to all the families living in the village. In addition to the loss of lives and injuries, around 15,000 maunds of wheat, rice and other grain, besides cash, jewellery, furniture, household articles, three tractors and all personal belongings of the families were destroyed.

The villagers said that the district administration and the town relevant committee had been promptly informed of the fire, but no fire tenders were sent to extinguish it and rescue people. Nor did any elected representative or district official bother to visit the village, they added.

Dadu Deputy Comm­issioner Samiullah Nisar Shaikh later said that preliminary investigation found the fire brigade of Mehar taluka was out of order and in need of repairs when it was required to put out the massive blaze.