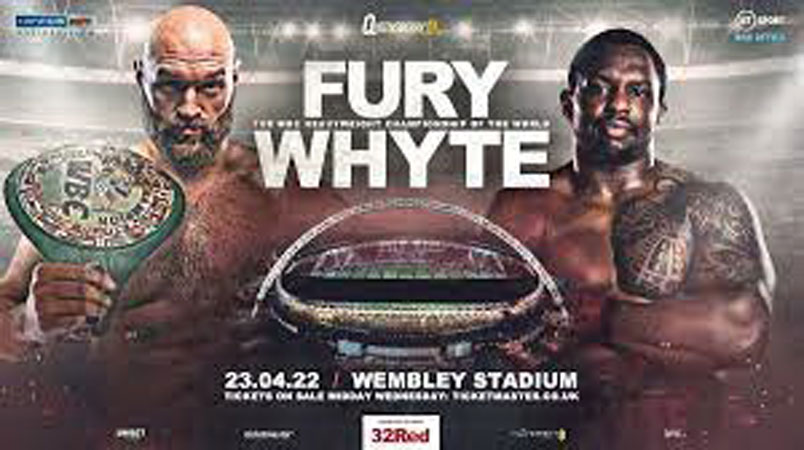 LONDON: Dillian Whyte may be the underdog in Saturday’s all-British heavyweight WBC world title bout with the incumbent Tyson Fury but the latter’s trainer says the pugilist known as ‘The Bodysnatcher’ can “surprise people”. Whyte is fortunate even to be stepping into the ring in a sold out Wembley Stadium after being shot — he once pulled a bullet out of his knee — and stabbed as a youngster. The Jamaica-born father of three — his first child was born when he was just 13 — said back in 2018 nothing in the ring can rival the dangers he faced on the streets. “Growing up, I got stabbed in a few places, had a few stitches, I got shot in the leg,” he told the Sun. “But I’ve always been a survivor, that’s what I’m good at doing.”

Whyte’s resilience in his professional career is attested to by staying in the game despite a two year doping ban and two bruising losses first to Anthony Joshua in 2015 and then Russian Alexander Povetkin — which he avenged in March 2021. Those are the only two defeats Whyte — who came to Britain aged 12 — has suffered in 30 bouts. No wonder Fury’s trainer, SugarHill Steward, says the 34-year-old is not to be taken lightly. “I think Dillian has grown a lot,” Steward told the BBC. “I see Dillian Whyte’s jab has got a lot better. I’m aware of that and working with Tyson on that. “He’s not a special talent of a fighter, but he’s consistent with pressure and comes with a lot of power. You always have to watch out for Dillian. He can surprise people.”

‘He’s the Bodysnatcher’: Whyte faces an opponent known as ‘The Gypsy King’ who is unbeaten in 32 fights — 31 victories and one draw. However, Whyte says having experienced the school of hard knocks he is well placed to produce an upset. “I’ve come to leave it all on the line. I’m used to taking risks and taking chances is nothing to me,” Whyte told the BBC. “I’ve had a lot of different fights in different places and fights where I’ve been the underdog. I’ve been through the mill already.” Whyte says 33-year-old Fury deserves respect but he is not the second coming of the legends of the division. “He’s a very good fighter,” said Whyte. “He’s the only one of our era who’s won all the titles — he’s a top fighter, undefeated, big guy. “But I don’t see him like everyone else sees him, like he’s the white 6ft 9in Muhammad Ali, Mike Tyson, Joe Frazier mix that’s reborn — I don’t see him as that.” Neutral observers largely favour Fury retaining his belt but one, Dave Coldwell — who guided Tony Bellew to the WBC cruiserweight world title — has a caveat. “Dillian’s not going to go out there and outbox Tyson Fury,” Coldwell told the BBC. “Dillian’s a great body puncher. He’s the Bodysnatcher. “He has some vicious body punches. I think he has to do that in this fight. “But his feet have got to be in range and that’s where the trickiness of the fight lies. “It’s all about whether he can get his feet into range and if he can’t then this is a very tough ask.”