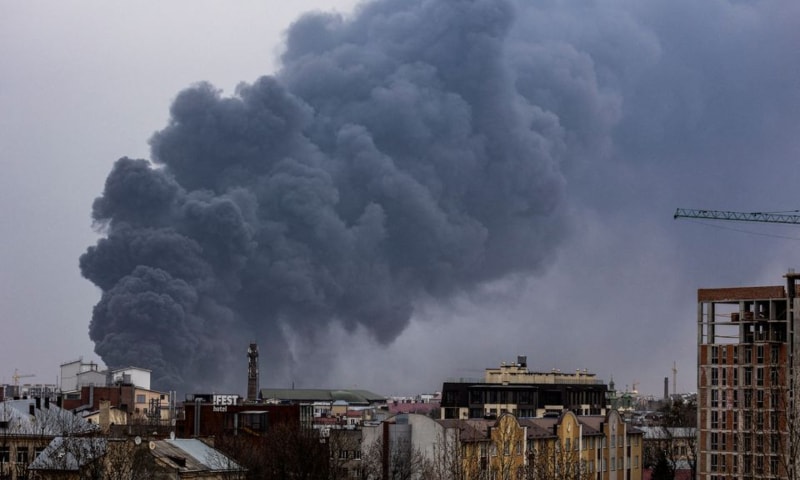 Five “powerful” Russian missiles hit Lviv on Monday, a city in the west of the Ukraine that has so far been spared much of the fighting since Russia invaded its pro-Western neighbour nearly two months ago, the city’s mayor said. A Lviv resident told AFP they could see thick clouds of grey smoke in the sky above residential buildings. The city’s mayor, Andriy Sadovy, wrote on social media that emergency services were at the site.

The strikes in Lviv come as Russia has intensified strikes in and around the capital Kyiv further east, targeting several facilities that produce military hardware over several days.

“Five powerful missile strikes at once on the civilian infrastructure of the old European city of Lviv,” Ukrainian presidential aide Mykhaylo Podolyak wrote on Twitter.

“The Russians continue barbarically attacking Ukrainian cities from the air, cynically declaring to the whole world their ‘right’ to kill Ukrainians,” he added.

The head of Ukraine’s national railways Alexander Kamyshin said on social media that some of the work’s infrastructure had beein damaged and there would likely be delays to servces but no passengers or staff were injured.

He also distributed a photo showing a blaze rising and plumes of smoke billowing from a small building adjacent to a railway track.

Sadovy said there had been no immediate confirmation of any deaths or injuries following the strikes. Lviv in late March was hit by series of Russian strikes that targeted a fuel depot and injured five people.

On March 18, bombardments hit an aircraft repair factory near Lviv’s airport. No injuries were reported.

Russian cruise missiles on March 13 targeted a major military base about 40 kilometres (25 miles) north west of Lviv, killing at least 35 people and injuring 134.

Close to the Polish border, Lviv has become a city of refuge for displaced persons and at the start of the war hosted several Western embassies transferred from Kyiv.