* ISPR DG asks political parties, public not to drag army into politics
* Gen Bajwa is not seeking an extension and will neither accept one
* US has not demanded military bases from Pakistan
* There will never be martial law in Pakistan
* Imran Khan, not establishment, put forward options to end no-trust deadlock
* Military was on board on Imran Khan's Russia visit 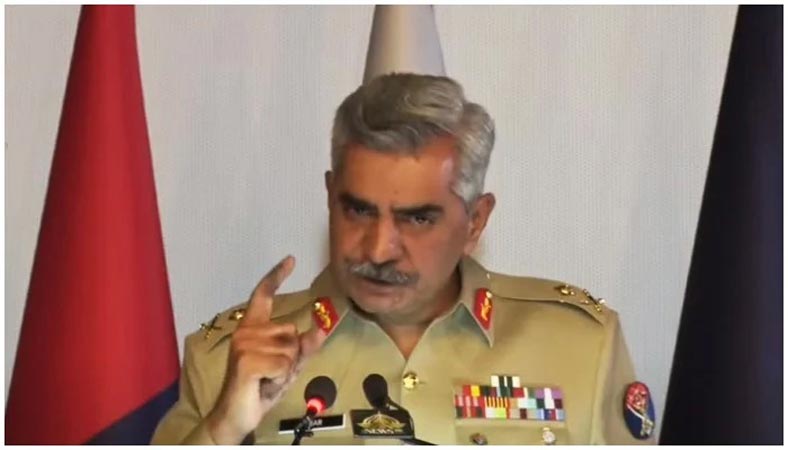 Addressing a press conference on the recently held 79th Formation Commanders’ Conference, Gen Babar said he could not discuss what was discussed in the meeting, but noted that the word “conspiracy” was not used.

He, however, said that the stance of the military leadership was conveyed in the meeting as well as the statement issued after it. “Whatever the meeting concluded is present in the statement.”

He said military agencies were working day and night against such plots and will not let them succeed. The DG ISPR explained that demarches were given, not just on conspiracies, but for many reasons. “In this case it was given for undiplomatic language and is equal to interference.” Responding to a question, the DG ISPR said “cyphers” are top-secret documents that are sent to the Foreign Office by Pakistani ambassadors from across the world.

“…we also receive some of these [cyphers] at the directorate of the Inter-Services Intelligence that is considered to be related to national security,” the military’s spokesperson said.

ISI had started its work when the cypher was received on March 7 or 8, and based on that, it gave its input to the NSC, the DG ISI said, but noted that cyphers come under the domain of the Foreign Office and only those related to the national security were shared with the military.

He said Gen Bajwa is not seeking an extension and will neither accept one. He added that the chief will complete his tenure in November this year.

“Let me put this to rest. The chief of army staff is neither seeking an extension nor will he accept an extension. No matter what, he will be retiring on the 29th of November 2022.”

The DG ISPR asked political parties and the public not to drag the Pakistan Army into politics. He said any effort to create a rift between people and the armed forces is against national interest. The military’s spokesperson welcomed constructive criticism but pointed out that a “malicious campaign” is being run against the army and its leadership.

Major Gen Iftikhar said that the formation commanders expressed confidence in the steps taken for the country’s security, especially on account of international security and the Pakistan Army’s role in upholding the rule of law.

“All of them agreed that democracy, the strength of institutions and rule of law and all the institutions working within the constitutional limits is the guarantor of national interest,” he said.

Major Gen Iftikhar went on to say that the nation’s support is the core of the army’s strength and without it, the concept of national security is meaningless.

He said that that is why any intentional or unintentional effort that becomes the reason for creating a rift between the nation and armed forces is against the broader national interest. Responding to another question, he reiterated that the army has nothing to do with politics. “There is no such thing as neutral.”

He said that the word neutral doesn’t appropriately describe the army’s stance. Instead, the word apolitical does it better.

“There is no interference by the army in any by-election or local bodies election.” He said that claims were made that “calls were received”, therefore, evidence should be brought to the fore if there is any.

“An organised malicious propaganda is being run against the Pakistan Army and its leadership. Even fake audio messages of different retired senior military officials are being created using a deep-fake technology to create a divide between the nation and armed forces.

“This is illegal, unethical and totally against national interest,” he said.

He then requested the public and political parties to not drag the army into politics.

“We want to stay out of it. Keep us out of this discourse,” he said, adding that this campaign didn’t get successful ever in the past nor will it in future.

Responding to a question about the BBC report on events that took place at the Prime Minister’s House on the night of Imran Khan’s ouster from power, Maj Gen Iftikhar said that it is a “false story” and nothing but a pack of lies”.

“The army has nothing to do with the political process that took place a few days back in the country,” he iterated. “Do not drag the army into political matters.”

On the ongoing propaganda against the security forces, the DG ISPR said that the concerned departments of the government were taking action against it and maintained that they have also traced foreign linkages during the probe into the malicious campaign.

“We have collected data around the malicious campaign against institutions. The campaigns started locally and have expanded globally. We will share our analysis in the coming days.”

He also urged the people to avoid sharing such reports without confirming them.

Maj Gen Iftikhar asked the political leadership to not malign the army chief and termed it unfortunate as the leader of an institution – that keeps working for Pakistan’s security – is defamed.

Moving on, the DG ISPR said the military had a lot on its plate already and was busy tackling the preexisting issues. “We cannot get involved in something else and dragging us into something else and blaming us for it is not justified.”

Maj Gen Iftikhar said the military would “absolutely not” impose martial law, noting that democracy was the only way forward for Pakistan – and the COAS has time and again maintained this.

“There will never be martial law in Pakistan […] as the country’s progress lies in democracy,” he said. Responding to a question about former prime minister Khan’s statement about providing military bases, Major General said that no such demand had been made on any level.

“However, the army would have the same stance of ‘absolutely not’ in case the military bases were asked for.”

The DG ISPR also categorically rejected the “rumours” about any political leadership meeting the army chief or his representative in Pakistan or outside.

The DG ISPR said that the establishment did not put forth options before then-prime minister Khan. He, however, said that during the deadlock, the Prime Minister’s Office contacted the military leadership to resolve the matter.

“The political parties were not ready for talks with each other to end the deadlock at that time,” he said. “The army chief and DG ISI visited the PM’s Office at their request to play the role of mediator.”

Options of no-confidence motion, PM’s resignation and dissolution of assemblies after withdrawal of the motion were discussed there, he said, adding that the then-prime minister had declared the third option as “acceptable”. Referring to Imran Khan’s statement regarding the nuclear assets “handed over to thieves”, Gen Iftikhar said that everyone has to be careful when speaking about nuclear assets.

“As far as our political leadership is concerned, the nuclear assets are not affiliated with any particular political leadership. Since Pakistan’s nuclear weapon has been started, all the governments that have come, have worked with all their loyalty has advanced the programme and helped it get where we are today.”

“This is the reason that our command and control mechanism and our assets’ security is one of the best systems in the international evaluation.”

When asked if the army was taken into confidence over the former prime minister’s visit to Russia, Gen Iftikhar said that the army was on board.

“However, at that time no one in their wildest dreams had known that Russia would wage a war on Ukraine on the same day, which was very embarrassing.”

The military’s spokesperson also clarified that the army chief did not attend Prime Minister Shehbaz Sharif’s oath-taking ceremony because he was ill – and there was no other reason.