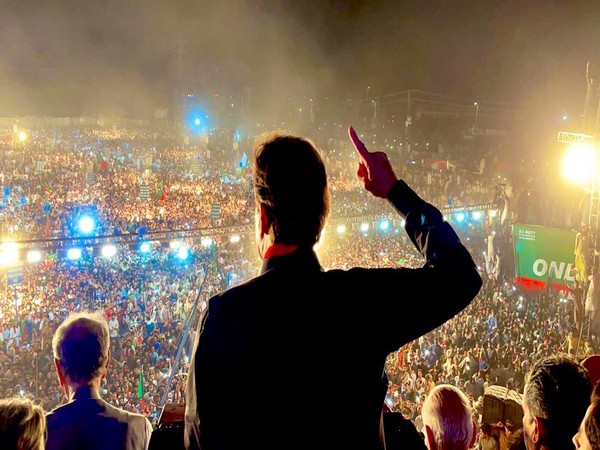 PESHAWAR: Imran Khan, the chairman of the Pakistan Tehreek-e-Insaf (PTI) and a former prime minister, questioned why the courts were opened late at night before he was removed from office on Wednesday.

On April 9, the Supreme Court was set to hear a case filed after the Supreme Court’s deadline for voting on the National Assembly’s no-confidence motion had passed, as former NA speaker Asad Qaiser delayed the vote until nearly midnight, and the Islamabad High Court was also opened to hear another case.

The speaker unexpectedly resigned and handed over the session to MNA Ayaz Sadiq, who conducted the vote on the no-confidence motion, making Khan the first prime minister to be deposed democratically.

At today’s rally in Peshawar, however, a charged Khan questioned the opening of courts and told the respected judges that during the lawyer’s movement, he had gone to jail for an independent judiciary.

“The courts were open late at night. Why? Is there anything I’ve done wrong?” He questioned, claiming that since entering politics, he has never incited people against institutions.

“I will live and die for Pakistan.”

The PTI chairman also warned that while he was not particularly dangerous while in power, now that he has been deposed, he will become “more dangerous” for the opposition.

“We will not accept an imported government,” he said, adding that “the people have expressed their displeasure with the move.”

According to the PTI chairman, Prime Minister Shehbaz Sharif and his son Hamza Sharif have been released on bail, as has PML-N supremo Nawaz Sharif’s daughter, PML-N Vice President Maryam Nawaz.

“By imposing these bandits on us, the US has insulted Pakistan; Shehbaz Sharif is facing Rs40 billion in corruption charges,” Khan added. “The US plotted the assassination of Zulfiqar Ali Bhutto, but this is not the Pakistan of 1970.” The narrator declares, “This is the new Pakistan.”

Ex-prime minister Khan has repeatedly blamed the US for backing the no-confidence motion that led to his ouster early Sunday, saying “there can’t be any bigger insult to this country” — but US Vice President Joe Biden’s administration has denied any involvement.

“He will not find a place to hide if I ask the people to stage protests,” Khan said, referring to Prime Minister Shehbaz.”

PM Shehbaz was sworn in as Prime Minister on April 11 after the PTI Chairman was successfully ousted.

According to the former premier, those who orchestrated the plot were overjoyed that he was removed from power. “I wasn’t dangerous in the government, but I’ll be even more dangerous now.”

“Diesel has been selling Islam for 30 years,” Khan said, referring to JUI-F leader Maulana Fazlur Rehman. “However, I thank Allah that it was I, a sinful person, who went to the United Nations to get an anti-Islamophobia resolution passed.”

Foreign powers may assassinate Imran Khan, according to Sheikh Rasheed.

He claimed that “India and Israel were the two countries that most rejoiced at my demise,” revealing the extent to which foreign powers were involved in his demise.

“Modi has begun to tweet Shehbaz, but he has never called Imran Khan,” Qureshi said. “When Imran Khan said that one day all other politicians will be united in their opposition to him, he was correct.”

According to Qureshi, Bilawal and Fazlur Rehman do not share an ideology, but they have similar vested interests.

He also took a shot at the MQM-P, which had previously been a PTI ally but had switched sides before the no-confidence vote, claiming that MQM leadership P’s had opposed the PPP for three years but had gone ahead and shook hands with them.

“However, the PPP now has the Khalid Maqbool Siddiqui-led party in its lap,” he said.

“By exploiting NSC, [Khan] hoped to gain political advantage. Imran will have nowhere to hide now that institutions have become neutral “Bilawal took to Twitter to express himself.

Meanwhile, PML-N Secretary-General Ahsan Iqbal claimed in a tweet that Imran Khan had broken the Constitution.

“Imran Khan’s actions were contrary to the Constitution. “Constitutional violators must be punished,” he demanded as the courthouse doors opened at 12 a.m.