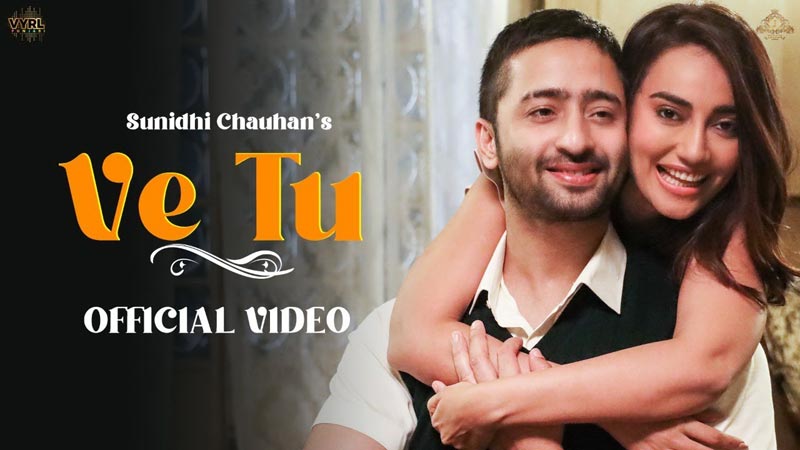 Vyrl Originals has come up with a new music video ‘Ve Tu’ featuring telly world a-listers Shaheer Sheikh and Surbhi Jyoti. The romantic track thst is sung by Sunidhi Chauhan, chronicles a unique love story of Amit (played by Shaheer Sheikh) and Sakshi (Surbhi Jyoti) that is narrated by Naina (Digangna Suryavanshi). Shaheer plays a blind person while Surbhi plays dumb in the music video. Despite both of them being differently-abled with their unique challenges, they fall in love with each other and have a passionate love story.??We hear this story through Naina, who can be seen sitting in the same house that once belonged to Amit and Sakshi.

Shaheer and Surbhi chemistry is palpable as Amit and Sakshi and fans are loving the music video. “The theme is something unique. Shaheer and Surbhi gave complete justice to the song. And no Sunidhi’s versatility couldn’t be complemented. Pooja Gujral has a good choice,” commented one person on the video. Another wrote, “This is not just a music, this is just like a film…. Wow … What a creation”. A third commented, “omg sunidhi’s voice on Punjabi/Jatinder Shah’s songs is always lit …what a deadly duo they are”.

‘Ve Tu’ music video is directed and composed by Jatinder Shah. Lyrics are given by Vinder Nathu Majra.

New Delhi: Actor Kartik Aaryan is currently busy shooting for his upcoming film, Shehzada in Mauritius. The actor seems to have a ball of time. Kartik is regularly sharing fun photos and videos from Mauritius making Farah Khan wonder if he is at all working there.??Kartik shared a photo and video album from Mauritius where he can be seen doing multiple things, alas except shooting. In one photo Kartik can be seen standing next to the sea and enjoying the stunning view and in another he shares a photo smile while standing amidst a bunch of people.

He also shared numerous videos, in one video, he can be seen giving an autograph to a young fan and in another he can be seen shaking a leg with the local dancers there and man, he really is killing it with those moves.

Earlier, Kartik also shared a photo with his ‘Shehzada’ director Rohit Dhawan and captioned his post, “Met this guy on the beach and decided to film some stuff Great week at shoot #Shehzada”.

Th actor has also shared a scenic video reel of himself enjoying a swim and wrote, “Shehzada’s day out”.

On the work front, Kartik Aaryan has an interesting lineup of films. H will kickstart his releases for the year with the much anticipated ‘Bhool Bhulaiyaa 2’. Besides this one, Kartik also has films like ‘Shehzada’, ‘Freddy’, ‘Captain India’ and Sajid Nadiadwala’s untitled next in his kitty.