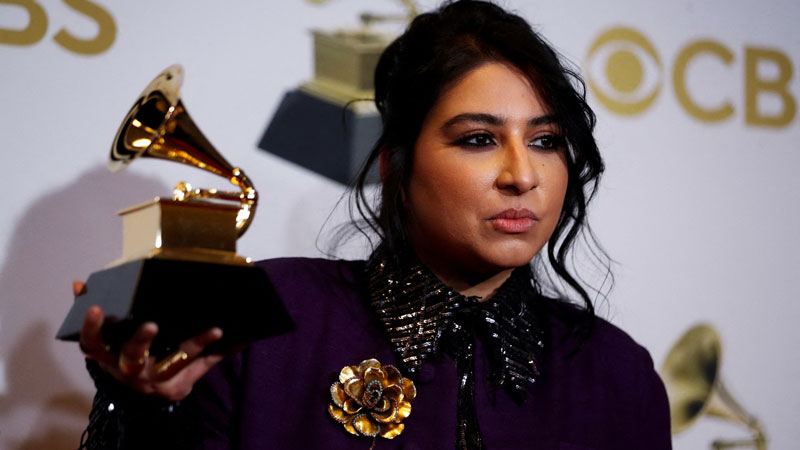 The Brooklyn-based Pakistani singer Arooj Aftab who bagged the first-ever Grammy for Pakistan earlier this month spoke with a local news portal about her life post the Grammy win.

For those unversed, Arooj bagged two nominations at the 64th edition of the most prestigious musical honors of the year – the Grammys – and was running for ‘Best Global Music Performance’ and ‘Best New Artist’ amid the likes of FINNEAS, Jimmie Allen, Olivia Rodrigo and The Kid LAROI.

She claimed the first-ever trophy of Grammy Awards in the category of ‘Best Global Music Performance’ for her song ‘Muhabbat’.

Speaking about the new projects in the working post the prestigious win, Arooj said, “I’m on tour right now; there’s a small stint of shows happening during all of April such as Iowa, Minnesota, Chicago.”

“There’s Coachella on both weekends followed by a show in Los Angeles,” she added. Touching upon the popularity changes after the landmark win, the songstress disclosed that she has gained thousands of followers on social media, adding that she is ‘enjoying all the love pouring’ from her new fans.

“After the win, I’ve mostly sold out and gained 50,000 followers. I’m sure they’re BTS fans but I’m not complaining,” she remarked. “I love them all and I love all my new fans and there’s just a lot of love pouring in and it feels really good and just kind of basking it in and doing this touring, staying healthy and safe, and trying to enjoy what has happened.”

“There are some big, beautiful shows that I’m looking forward to and hitting those audiences. They’re mostly all sold out at this point and that’s super exciting,” she concluded.

It is pertinent to mention that the Grammy-winner is the first Pakistani performer ever to be lined up for the Coachella music and art festival as well.

The festival is slated to stage over the weekends of April 15-17 and April 22-24 this year – after scraping for the last two years – and Arooj is lined up to rock the stage on both weekends.