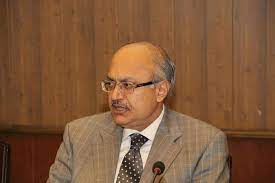 LAHORE: Yousaf Naseem Khokhar, who is currently posted as the interior secretary, has declined to consider the offer of becoming the chief secretary of Punjab, sources told on Sunday.

Khokhar was among the list of three people proposed by the Punjab government, to take the top bureaucrat’s seat in the province.

Apart from Khokhar, the names of Tahir Khurshid, and Abdullah were given to the federal government to take up the post of Punjab chief secretary. All three are senior bureaucrats, currently serving in the federal government. It is learnt that Khokhar told the Establishment Division secretary that he found it beneath his dignity to be bracketed with Tahir Khursheed, one of the other contenders.

Khokhar has already served as chief secretary for more than a year during the Usman Buzdar-led government. The federal government removed him from his post in November 2019 and Azam Suleman Khan was posted as his replacement.

Tahir Khurshid served as former Punjab Chief Minister Usman Buzdar’s principal secretary. He was relieved of his duties following an investigation into assets beyond means case initiated against him by the National Accountability Bureau.