* 'I have gained and lost 100lbs 3x so I never thought this moment could or would happen, but I'm finally spring breakin' wearin' a BIKINI!!!!!!' she wrote in the caption 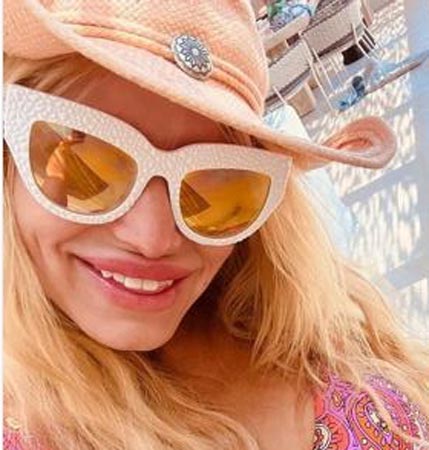 Jessica Simpson is loving the skin she’s in. The 41-year-old fashion designer took to Instagram on April 7 to post a picture of herself wearing a pink paisley print bikini from her collection and share with her 5.8 million followers what the moment meant to her.

“I have gained and lost 100lbs 3x so I never thought this moment could or would happen, but I’m finally spring breakin’ wearin’ a BIKINI!!!!!!” she wrote in the caption. “Hard work Determination Self Love I enjoyed a good proud cry today.”

Over the years, Simpson has spoken openly about her relationship with her body. In an essay she wrote for Amazon Original Stories called “Take the Lead” that was released last year, the singer wrote about her decision to throw out her scale.

“It’s part of the work on myself that continues,” she penned in the piece. “I am still finding things to let go of, and one of the more meaningful releases has been the scale.” As Simpson noted in the essay, she’s faced public scrutiny, judgment and body shaming over her weight throughout her career. But the moment she decided to throw out the scale came in 2019, when she weighed herself three weeks before she gave birth to her now 3-year-old daughter Birdie. “I weighed more than my husband, a six-foot-three former tight end in the NFL,” Simpson who also shares daughter Maxwell, 9, and son Ace, 8, with her spouse Eric Johnson, wrote.

Afterwards, Simpson started to cry. “Here I was, creating life, this miracle baby that we didn’t expect but welcomed because we knew she was exactly who we needed to complete our family,” she continued. “My heart literally beat for hers. I looked down at my belly, which was all I could see back then anyway, then over to the scale. ‘This,’ I said aloud, ‘is not right.'” So, The Dukes of Hazzard actress took the scale and put it straight in a trash bag. “‘Goodbye,’ I told the scale,” she wrote in the essay. “I don’t care if you’re broken. I’m not.”

Simpson shared she later lost the weight she had put on during her pregnancy with Birdie, noting she “worked hard to do it, not because of a number but because I wanted to get back to a weight that was comfortable to me.” She also wrote in the essay that she works out on the treadmill and with a trainer, “taking pictures of the miles and times on my treadmill to help me stay accountable to myself. Not someone else, or a number. This has been, finally, for me.”