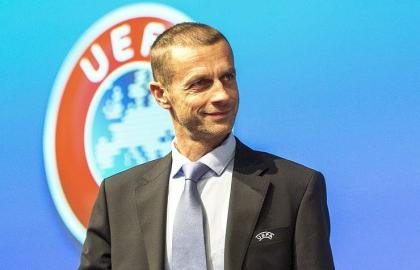 London: UEFA chief Aleksander Ceferin said Thursday he was sick of talking about a breakaway European Super League, accusing club chiefs still committed to the idea of living in a “parallel world”.

Twelve of Europe’s biggest clubs signed up to the proposed new competition last April but it collapsed within days following a fierce backlash from their own players and fans, as well as governments and football’s governing bodies.

Nine clubs distanced themselves from the project but Real Madrid, Barcelona, and Juventus remain on board with the concept and former England fullback Gary Neville warned this week that it could make a comeback.

Ceferin, addressing the Financial Times Business of Football Summit in London via videoconference, said he was “sick and tired” of speaking about the Super League.

“Look, first they launched this nonsense of an idea in the middle of a pandemic,” he said, speaking from the European governing body’s headquarters in Switzerland.

“Now we are reading articles every day they are planning to launch another idea in the middle of the war (in Ukraine). They obviously live in a parallel world.

“While we are saving players, together with other stakeholders, and work to help in a terrible situation, they work on a project like that.”

He added: “This is complete nonsense and everyone except them knows it.”

Ceferin took aim at Juventus supremo Andrea Agnelli — formerly chairperson of the European Club Association — who was one of the driving forces behind the original Super League proposal, aided by Real Madrid’s Florentino Perez.

“Last year was the first time not one, not two, not three, but 12 clubs, made a statement, which was a profound shout of alarm to the system, that we have to do something to create a sustainable industry,” said Agnelli, who addressed the conference in person.

Ceferin said clubs were free to organize their own competitions but could no longer expect to take part in UEFA competitions such as the Champions League if they broke away from the existing football structure.

He also rejected comparisons between the proposed Champions League reforms planned for 2024 and the Super League.

Barcelona has already crashed out of the Champions League at the group stages for the first time since the 2000/01 season, while Madrid and Juventus failed to win the first legs of their last 16 ties.

All three are feeling the economic squeeze of trying to compete with the likes of Gulf state-backed Manchester City and Paris Saint-Germain, while England’s Premier League clubs have a huge advantage over their European rivals due to television rights sales.

“Every time I hear communication from these (Super League) clubs I get across, they lie more than Putin, to be honest,” Tebas said via a translator.

Tebas also alleged that there had been a meeting between the Spanish giants and Juventus recently at Agnelli’s house.

“What they’re saying, especially the Real Madrid president is that they failed the first attempt. They have seen it was difficult to get English clubs to take part,” added Tebas.

“They are trying to design a model where English clubs are not present; there will be the other four (Major European) leagues.”