* Syeda Ghulam Fatima, Wardatul Amani Wan Salim, Rozina Karmaliani, Maryam Bibi and Jacquiln Novogratz were some of the iconic women honoured during the ceremony
* The awards ceremony, which was held at the Jinnah Convention Centre, began with Ahsan Khan and Mira Sethi giving a brief introduction on how the night was going to turn out 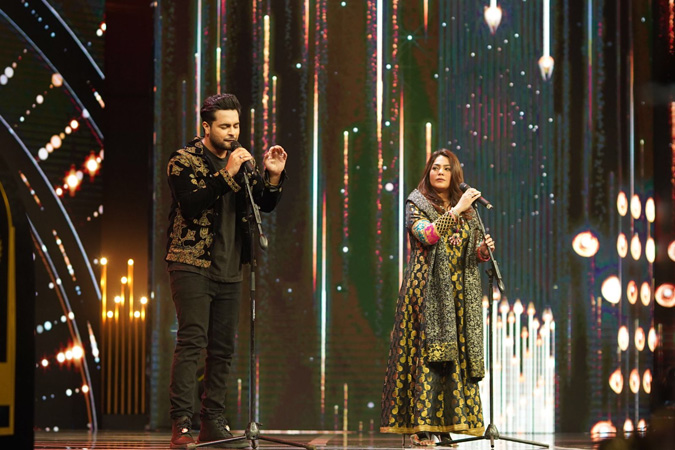 Give yourself a pat on the back if you are a woman and have worked towards achieving your goals and dreams despite numerous challenges. Be very proud of yourself if you’re an unsung heroine.

For a third consecutive year, Hum TV honoured 11 iconic women for their tireless journey towards self-empowerment in a variety of fields last weekend in the capital where President Arif Alvi graced the event and gave an extremely motivating speech lauding womenfolk and the challenges they overcome every day in their pursuit of freedom and independence.

The awards ceremony, which was held at the Jinnah Convention Centre, began with actor Ahsan Khan and novelist Mira Sethi giving a brief introduction on how the night was going to turn out and expressed their excitement to see the unsung heroines finally getting the credit at this ceremony also.

Chief guest of the event, Dr Arif Alvi while addressing the attendees said, “Changing the centuries old traditions and norms of discouraging women from pursuing their goals and ambitions and violence against women are hard tasks but it can be changed with strong will, determination and re-education. Though government is responsible for providing preventive measures in cases of violence against women, it is the people who need to step up when they witness such atrocities being committed.”

Dr Arif Alvi also stressed on the need to provide opportunities to enhance the skillset of women working in different sectors. 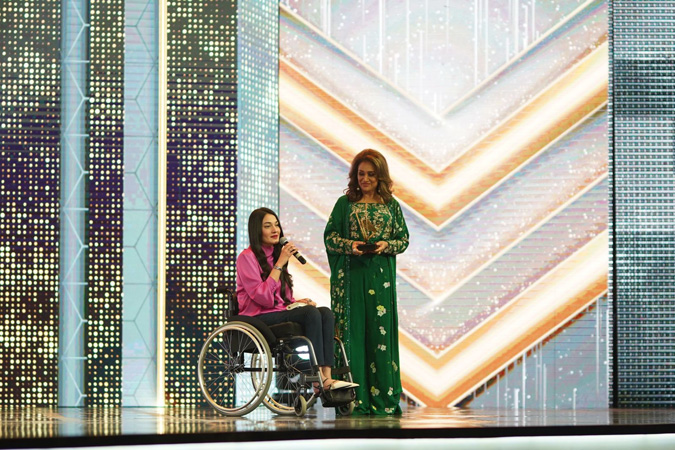 Shortly after Hum Network’s very own Sultana Siddiqui gave a short speech on women empowerment, the first of these iconic women were presented the Hum Women Leaders Awards. Activist and anchor Muniba Mazari was presented the away by actress and singer Bushra Ansari. Muniba Mazari speech really moved us especially when she said, “A woman doesn’t have to win awards and shatter the glass ceiling in order to feel strong. If you’re just waking up every morning and getting through the day, overcoming daily challenges and silently making your way towards achieving your goals, that is enough to make you a strong, inspiring woman.” Mazar’s speech was met with a loud applause and cheer from the audiences.

Mazari is Pakistan’s first United Nations Women’s Ambassador. She has also been ranked in the Forbes 30 under 30 list and was included in the list of World’s 500 Most Influential Muslims in 2019 and 2020 consecutively.

The second award of the evening was presented by director and producer Momina Duraid and the British High Commissioner to Pakistan Dr Christian Turner to activist Syeda Ghulam Fatima. Known as the Iron Lady of Pakistan, she has worked tirelessly in helping many break the shackles of slavery. Syeda Ghulam Fatima has freed and rehabilitated more than 85,000 bonded labourers in the country. She has been acknowledged by the United States Department of State and has also been awarded the Clinton Global Citizen Award and was one of the four finalists for the Aurora Prize for Awakening Humanity.

The next award was presented to Dr Wardatul Amani Wan Salim from Malaysia. A PhD in Biomedical Engineering at the Purdue University of Minnesota, she was the first person to come up with the novel idea of the first ever portable biosensor with which anyone can assess the quality of drinking water for harmful bacteria. In 2012, Thora Halstead Young Investigator awarded Dr Amani on the Cell-Electrophysiology Lab-on-a-chip and in 2015, Dr Amani was awarded the L’Oréal-UNESCO for Women in Science. This was followed by a tribute to the legendary singer Reshma Gee, a global music icon and a genius, by none other than the extraordinary Sanam Marvi and Asim Azhar.

The next award was presented by Federal Minister for Inter Provincial Coordination Fehmida Mirza and Punjab Oil Mills Chief Executive Officer Usman Elahi Malik to Dr Rozina Karmaliani for her exemplary work in the field of healthcare and for taking the field of nursing to a whole new level for the first time in the history of Pakistan. Dr Karmaliani was the first Pakistani nurse to obtain a PhD in nursing from United States of America and is one of the key leaders and the most prominent figure in starting Bachelors, Masters and PhD degrees of nursing in Pakistan. The next award was presented by Barrister Khadija Siddiqui and Muhammad Shahnawaz, Director HR United Industries Limited to Maryam Bibi for the outstanding work of her organisation Khwendo Kor which means “sisters’ home”. Through her organisation, Maryam Bibi helps oppressed women who live in the remote areas of the Khyber Pakhtunkhwa Province, in particular in the territories known as FATA. The next award was presented to Jacquiln Novogratz, founder of Acumen. Acumen has invested $146 million of patient capital in 151 companies, bringing basic services like affordable education, healthcare, clean water, energy and sanitation to 331 million people across Africa, Latin America, South Asia and the United States of America. She joined the ceremony via a video message and the award was received by Sara Nisar, Fellow Associate – Acumen on her behalf from Fiza Farhan, Global Strategic Development Advisor on Women Empowerment and Mian Shahzad.

Chief guest of the event, Dr Arif Alvi while addressing the attendees said, ‘Changing the centuries old traditions and norms of discouraging women from pursuing their goals and ambitions and violence against women are hard tasks but it can be changed with strong will, determination and re-education’

This was followed by a funny skit prepared by Yasir Hussain and Bushra Ansari, called ‘Majboor Sahafi & Shauqiya Siysatdani,’ which had the audience in splits.

The next award was presented to Dr Azra Raza for her outstanding contribution in the field of healthcare, particularly her cancer research initiatives and programmes. Dr Azra says she is on the threshold of discovering the method of identifying the first cancer cell to prevent cancer. She thanked the management of HWLA via a video message. Yasmeen Lari, Pakistan’s first female architect and CEO of Heritage Foundation was awarded for her conservational work on several World Heritage Sites at Makli and Lahore Fort, as well as 19th Century buildings in Karachi, Lahore and Peshawar. As per the tradition of HWLA, the next award was awarded to a man, Dr Shershah Syed, a beacon of hope for thousands of women who have gone through gynaecological diseases, the cure for which they thought never existed in this side of the world. The award was presented by Wendy Gilmour, Canadian High Commissioner and Duraid Qureshi, CEO Hum Network Ltd. Up next was a scintillating musical performance by Haider Mustehsan and the king of bhangra Abrarul Haq.

The last segment of the ceremony began with the first award present by Sultana Siddiqui to Noorjehan Bilgrami, an artist, researcher, educationist and the principal curator of the Pakistan Pavilion at Dubai Expo 2020. The next award was presented to Fiza Shah for her work in empowering underprivileged children by providing them free education. Her organisation Development in Literacy has helped thousands of children across the country to fulfil their biggest dream of getting an education and many have started their careers as doctors, engineers, teachers, bankers, professors, business and IT professionals due to this. The award was presented by First Lady Samina Alvi, who appreciated Fiza’s work. The last award of the evening was presented by President Arif Alvi to Justice Majida Rizvi, who has the distinction of being appointed Pakistan’s first woman judge to the high court and has worked relentlessly for the rights of women and children in the country. Justice Majida Rizvi has also served as the first chairperson of the National Commission on the Status of Women, and has undertaken historic work on the review of discriminatory provisions pertaining to women’s right to assets, women’s employment in the public sector and the Qisas and Diyat laws.

The awards ceremony will be televised in March 2022 on HUM globally. HWLA aims to recognise and honour the contributions and achievements of iconic women from Pakistan and around the world who are change makers in their respective fields and a symbol and source of hope, courage, determination and inspiration for women across the globe. These iconic women are mentors and role models for girls who aspire to be achievers.