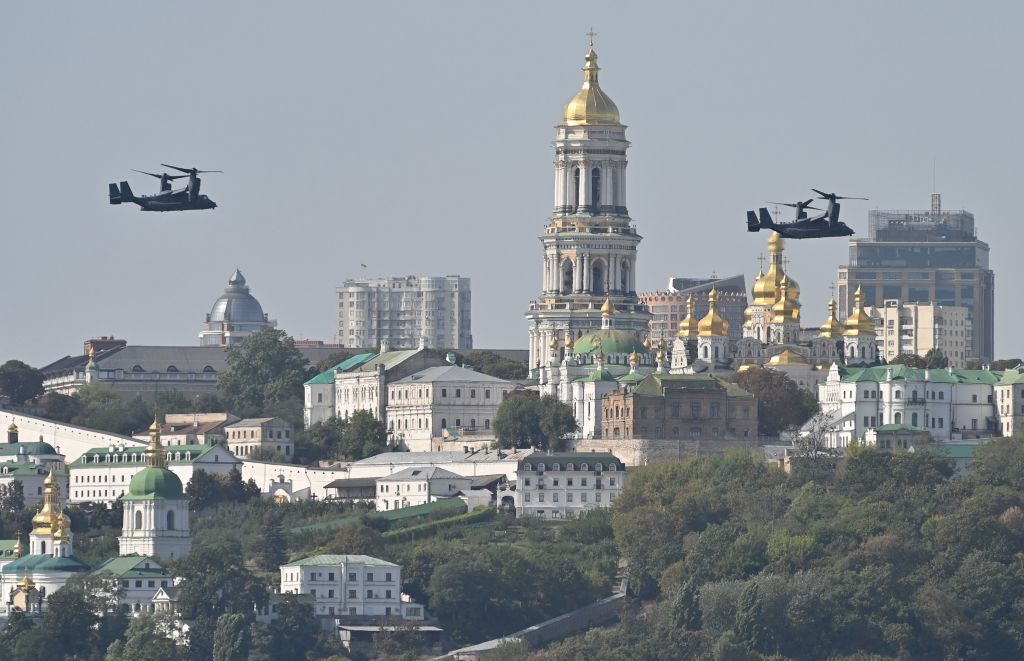 Russian airborne troops landed in the eastern Ukrainian city of Kharkiv on Wednesday, the Ukrainian army said, adding that there were immediate clashes.

“Russian airborne troops landed in Kharkiv… and attacked a local hospital,” the army said in a statement on messaging app Telegram. “There is an ongoing fight between the invaders and the Ukrainians.”

It has been a target for Russian forces since President Vladimir Putin launched an invasion of Ukraine last Thursday.

In Kherson on the Black Sea, where officials had on Tuesday reported Russian checkpoints encircling the city, Russian forces took control of the railway station and the port overnight, city mayor Igor Kolykhayev was quoted by local media.

In Mariupol, a port on the Sea of Azov, more than a hundred people were injured on Tuesday in a Russian fire, the mayor of the city, Vadym Boychenko was quoted as saying by Ukrainian media.

In Borodyanka, 50 kilometres from Kyiv, Russian airstrikes destroyed two residential buildings on Tuesday, according to Ukraine’s deputy minister of foreign affairs Emine Dzhaparova, who shared a video of the grey buildings partially in ruins, with apartments in flames.

The Ukrainian Ministry of Defence also said overnight that it feared an attack from Belarus.

“Belarusian troops have been put on high alert and are concentrated in areas closest to the border with Ukraine,” the ministry said in a statement on Facebook.

During the day on Tuesday, Ukrainian intelligence noted “significant activity” of aircraft in the border area, and convoys of vehicles carrying food and ammunition were observed there, the statement said.

In view of these movements, Belarus “could probably support the Russian invaders in the Russian-Ukrainian war in the future”, warned the ministry.

“Missile attacks against military and civilian targets” in Ukraine have been “systematically” launched from Belarusian territory since the start of the Russian invasion on February 24, the ministry added.

As a street battle with invading Russian forces raged overhead, Kyiv resident Yulia Snitko spent the night cowering in the basement of her apartment block praying for her unborn baby.

Eight months pregnant and with her bulging belly showing through her clothes, she was terrified that each blast or volley of gunfire from an attack on a nearby military facility could send her into labour.

“I’m trying to stay as calm as possible to not cause a premature birth,” the 32-year-old told AFP on Saturday morning in the Soviet-era bomb shelter.

“At night it was more than one hour of huge explosions, it was very stressful. When I realised what was happening, I was trembling, totally shaking for five minutes.”

Around her, families huddled together on the cardboard boxes and camping mats they were using as makeshift beds.

On the streets above it was a bright sunny day, but only a handful of civilians were brave enough to queue for emergency food supplies, as Kyiv has been transformed within days into a war zone.

Tanks manoeuvred along the streets as the city, home to three million people, braced for an all-out assault by Russian forces pushing towards it.

The burnt-out wreckage of a Ukrainian military truck still smouldered in the middle of the grand Soviet-era Victory Avenue and soldiers cleared away debris.

Nearby, a Ukrainian soldier commanded an elderly volunteer as he hastily dug a trench in preparation for fresh attacks.

Several servicemen said Russian forces a few kilometres away had been firing barrages of rockets indiscriminately from their feared Grad systems.

The sounds of explosions rumbled in the distance.

Suddenly the wail of an air raid siren sounded and the civilians on the street sprinted for the nearest shelter.

City authorities blamed Russian “sabotage groups” for the attacks in the city overnight and said Moscow’s regular forces were fighting to break in.

One rocket blasted a gaping hole across several floors of an apartment block not far from the city centre sending rubble spewing onto the street below.

Teacher Irina Butyak, 38, has spent two days in the basement of her apartment block sheltering together with some 20 people.

As air raid sirens blared directly overhead, some tried to sleep on mattresses on the ground, some sat on stools chatting.

“We have train tickets for western Ukraine for tomorrow. I don’t think we will take the train,” she told AFP.

Buses have stopped running and Kyiv’s metro has been turned into a giant bomb shelter.

“We’ll sit here until we can get to the train station,” she said.

She was still struggling to digest the nightmare unfolding around her as the city plunged into violence.

“We thought something like this might happen but we were hoping until the end that it wouldn’t,” she said.

“We were hoping that common sense and common decency would prevail. Well, it didn’t.”

Pensioner Anatoly Shayduk could not control his rage at the man — Russian President Vladimir Putin — who has unleashed this horror.

“This Hitler is trying to seize power,” he said.

“We are not afraid! If you knew how many young people have already stood up and taken their machine guns! I am 68 years old, but I will take any gun tomorrow and will shoot.”