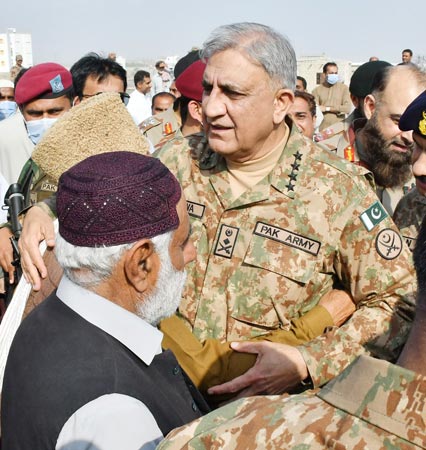 According to the ISPR, the COAS appreciated the morale and operational preparedness of the troops and showed satisfaction on successful operations against terrorists.

Later, the COAS visited the University of Turbat and had a detailed interactive session with a large number of representatives from all segments of society from district Kech including local leaders, notables, tribal elders, students, lawyers and women.

On the occasion, the army chief encouraged the youth to join local law enforcement agencies (LEAs) and contribute towards the security and stability of the area.

“Balochistan youth is very talented and must capitalize on the available opportunities being created for their education and skill development,” the ISPR quoted the COAS as saying.

“Peace and prosperity of Balochistan is the top priority and Pakistan Army will do all to provide a peaceful environment for population centric socio-economic projects in Balochistan,” the COAS reiterated. He concluded that the people of Balochistan have given great sacrifices for development and stability whereas through comprehensive national effort, true potential of Balochistan will be realised. Earlier, on arrival at Turbat, the COAS was received by Commander Quetta Corps Lieutenant General Sarfraz Ali.