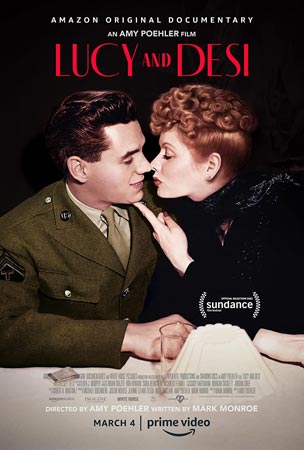 The wasn’t a genius,” says one talking-head commentator early on in Lucy and Desi, Amy Poehler’s new bio-doc tribute to the illustrious creative partnership between the sitcom’s queen and king, Lucille Ball and Desi Arnaz.

That sounds like a swipe out of joint with the film’s overall attitude of soft-focus hagiography, but it’s meant as a testament to her indefatigable self-starter ethic. Ball’s success wasn’t effortless, we’re told, due to some innate talent she could activate as she pleased. Far from a God-given gift, her rubber-faced comedic chops were honed over years of teeth-cutting and stripe-earning on stage. Everything she had – the fame, the fortune, a seat at the head of the table in the largest independent studio in Hollywood – she got by working herself to the bone.

It’s easy to see why Ball would be an aspirational figure for someone like Poehler, a fellow female comedian who triumphed over a male-dominated showbiz architecture by making a spectacular fool of herself on a weekly basis. Her assertive confidence behind the scenes, coupled with a bold un-self-seriousness at a time when the feminine ideal was that of the domestic goddess, made her a role model to a generation of cut-ups including Carol Burnett and Bette Midler. They both sit for Poehler’s camera to sing the praises of their idol, adding their voices to a chorus of adulation that drowns out everything else. The evident bounty of affection for Ball, however well-founded, doesn’t just leave Arnaz as a supporting character in this ostensible double portrait. It lends the whole production the syrupy taste of PR, like we’re watching a special-feature supplement on the home-video release of Being the Ricardos.

Those approaching the documentary as an opportunity to spend 100 minutes poring over rare archival footage of Ball and Arnaz will find their low bar amply met. Zippy montages of home movies or photographs paired with preserved audio, often whisked along by hooray-for-Hollywood hot jazz, walk us through the beats of the couple’s early years. She was a pathological entertainer who muscled her way through Vaudeville and B-movies; he was a Cuban refugee from the Batista regime bringing the conga line to America as a high-energy bandleader in Miami. Theirs was a publicity romance turned real, and then transformed back into fiction once CBS offered to turn her radio show into a TV series and she demanded her real-life husband join her onscreen.

I Love Lucy forever enshrined their union in the public imagination and made them the flawed, relatable antidote to the perfectly-pressed household ideal of Leave It to Beaver. But their success also began to drive a wedge between them that would end in divorce. He didn’t always enjoy being at the helm of the business while she, the funny one to his straight man, ascended to the highest tiers of stardom. Cranking out 41 episodes over 41 weeks left them with little time to spend together, a situation not helped by Arnaz’s womanizing, which the film restricts to a brief mention. Poehler instead focuses on the long-standing respect and the love that never extinguished ever after their split, allowing the acrimony to be present while relegating it to the background. As unimaginative a conclusion as it might be, watching Arnaz’s posthumous letter to his former wife recited at the Kennedy Center Honors nonetheless ends things on a tear-jerking note.

More than any canniness in its arrangement, the film benefits from having a lot of watchable raw material to work with. Its most edifying insights pertain to how the couple’s production company Desilu revolutionized the way TV was made. Arnaz had the bright idea of adding a live studio audience to the multi-camera setup to capture the crackle of live performance, and essentially invented the next 50 years of small-screen comedy. Ball worked her real-life pregnancy into the scripts, a first in an era that preferred to leave such bodily matters undiscussed, and her resultant maternity leave led to Arnaz’s innovation of the rerun. One genuinely moving, inspired moment connects Ball’s expert character work to a compassion for humanity, suggesting that she learned fluency in shtick by taking an interest in strangers’ mannerisms everywhere she went.

Yet their achievements along professional lines always lead back to the easily-agreed-upon assertion that Ball was a great performer and human being, and that she and Arnaz were each other’s lifelong muse. Though the clips of our old pals Lucy and Desi muster the pathos required to pull off these bids for sentimentality, as a work unto itself, the film is just the latest in a long line of pedestrian paint-by-numbers canonizations for Boomer-beloved icons of the 20th century’s latter half. For all the amazement at Ball’s tireless hustle and explosive originality, there’s a terminal lack of both in this monument to her memory. Lucy and Desi is available on Amazon Prime on 4 March.