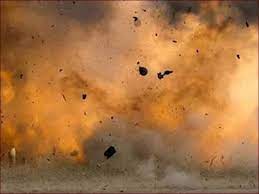 Quetta: At least four people have been martyred and 10 others injured in a blast in Mat area of Sui in Balochistan’s Dera Bugti district on Friday, Levies officials said. According to officials at the Levies Control Room, the victims were passing by the area when their vehicle drove over a landmine.

Balochistan Chief Minister Mir Abdul Quddus Bizenjo condemned the incident. In a statement, he identified the deceased as members of the local Aman Force and expressed grief over their martyrdom. The details were shared by Senator Sarfraz Bugti from his Twitter handle, who said that four people were martyred while 10 others were injured in an attack in Mat area of Sui.

“Baloch Republican Army terrorists were behind this attack,” he claimed and asked as to how long the state will continue to tolerate such attacks on innocent people.

Prime Minister Imran Khan paid tribute to the ten Pakistan Army soldiers who laid down their lives while repulsing a terror attack on a checkpost in Balochistan’s Kech.

Taking to Twitter, the prime minister said, “Our brave soldiers continue to lay down their lives to keep us safe from terrorists. I salute the 10 martyred soldiers who repulsed a terrorist fire raid on checkpost in Kech Balochistan.”