* ‘When Ali invited me to make a proposal for this project, it immediately clicked,’ Imran Qureshi says 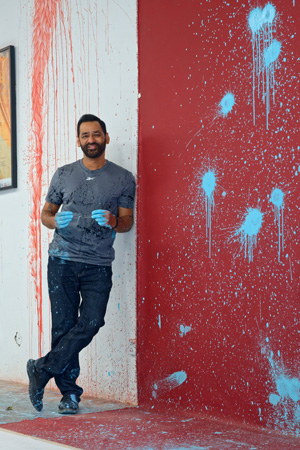 Staying true to their tradition of bringing new and innovative ideas to the game of cricket, PSL’s most successful franchise and winner of season 1 and 3 of the competition, Islamabad United, proudly present the world’s first cricket x art collaboration in partnership with one of Pakistan’s most iconic artists, Imran Qureshi.

Under the project, AANideasLAB: IQ X IU, artist Imran Qureshi interacted with the Islamabad United players, conducting a visual art project, spread over several weeks. This collaboration aims to celebrate sport and art, two of the most universal languages we have today, bringing art to the Pakistani public through their love for the game of cricket.

“Since its inception, Islamabad United has been focused on bringing innovation to the PSL and one of our missions has been to use the huge reach of cricket in introducing socially positive causes to a wider audience. I am especially enthused about this idea as it combines two of our passions – cricket and art – together, something not done before anywhere in the world. I have been thinking about this idea for a few years but Covid delayed its execution until this year. The project will help in mainstreaming visual and other arts to cricket fans in Pakistan as well as to a global audience. I am grateful to Imran Qureshi for accepting such a challenge as its inaugural artist and to the Islamabad United players who have shown flexibility for this totally new experience. Like all of you, I am keenly looking forward to seeing what creative forms this project takes” said Ali Naqvi, owner of Islamabad United.

“When Ali invited me to make a proposal for this project, it immediately clicked. I have always wanted art to be shared as widely as possible. Both arts and sports enable us to express ourselves physically, emotionally and even intellectually, allowing us to connect and communicate with each other around the world, crossing borders, cultures, languages and generations. If we blend these two languages into one, I believe we could create a powerful new vehicle and platform that could reach, and connect with, an even bigger audience. In Pakistan, Cricket provides a perfect platform for that objective. With my contribution I wanted to capture the energy of not only the sport and its players, but also the excitement and passion of the audience, the love for this game”, said Imran Qureshi

The artistic output of the project will be used in the team’s official kit as well as other ventures this season.

Islamabad United is the most successful team of the Pakistan Super League (PSL); winner of the first and third seasons of the HBL PSL, in addition to having the highest win percentage in the tournament’s history. The franchise believes in bringing change to Pakistani sports with the introduction of international standards of practice and a commitment to continuous progress.

Imran Qureshi, Pakistan’s pre-eminent international visual artist, was born in Hyderabad, Pakistan and earned a BFA at the National College of Arts Lahore with Distinction in 1993. He started teaching at the same institution shortly after. Imran Qureshi has exhibited both locally and internationally for over twenty-five years and has managed to greatly expand the language of miniature painting, both in its traditional form as well as other iterations such as site-specific installations, three-dimensional works, video installations, performance art and paintings. His work has been shown in more than 130 exhibitions in public institutions and his artwork has been collected by global museums and public collections.

In 2011 he was awarded with the Sharjah Biennale 10 Art Prize-2013, Deutsche Bank Artist Of The Year Award-2013, Medal Of Arts Award by The State Department Washington DC-2017 and Asian Art Game Changer Award by Asia Society Hong Kong & New York-2019 and the Sitar-e-Imtiaz conferred by Pakistan in 2020. His earliest award includes the Haji Muhammad Sharif Award for Miniature Painting-1993 at the NCA Lahore. His permanent public art commission In Pakistan is a two hundred feet mural displayed at the Islamabad International Airport.

AAN Leonine Sports is the proud owner of Islamabad United, the FIRST CHAMPIONS and the most successful team in the Pakistan Super League. AAN-Leonine Sports is focused on enabling sports and creating franchises with a mission to provide: 1) A truly global experience on sports entertainment; 2) A fan base which is loyal, aware and supportive of the sport and the franchise; 3) An aspirational beacon for up and coming players to strive for excellence in cricket for Pakistan in particular and for the world at large; 4) An eco-system for the promotion of sports through close partnerships with the respective sports boards; 5) A truly professionally-run organization with exceptional standards of corporate governance and international best practices; 6) Promotion of Pakistan through sports and involvement of internationally known figures into Pakistan; 7) A responsible member on CSR.

The company focuses on the above mission statement by implementing a strategy built around the principle of 4 Es – Excellence, Empowerment, Education and Environment.