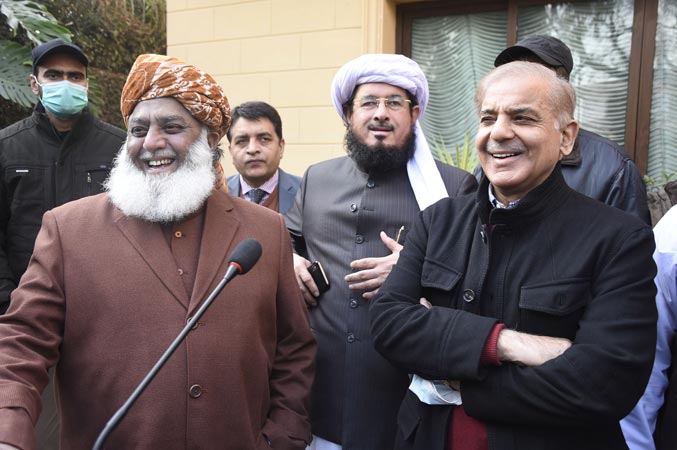 Speaking to media after a meeting in Islamabad, Shahbaz Sharif mentioned that during his meeting with Fazl, both of them discussed the no-confidence motion and that the issue will be further debated in the meeting scheduled to be held later this month.

Both the leaders reiterated that the ‘Mehngai March’ (march against inflation) to Islamabad on March 23 has become inevitable. Shehbaz said that meeting of heads of PDM’s component parties will be held around January 25 to hold consultation on organsational matters ahead of the march. “We have agreed to fight against mini-budget and cruel actions of the Pakistan Tehreek-e-Insaf (PTI) government,” Shehbaz said. “Pakistan is going through its hardest phase in 74 years including economic, foreign, and governance issues. I have never seen a feeble, incompetent and corrupt government in my lifetime,” he said, adding that the time has come to use political, legal, and constitutional ways against the government.

Fazl said the ECP should not make itself “controversial”, adding that the commission “should not be enslaved.” “We don’t give Prime Minister Imran Khan and his government the right to re-colonise an independent state.”

The JUI-F chief said that the long march announced against the government has become inevitable and the PDM will march towards the capital on March 23 in a bid to oust the PTI-led government. He, however, added that the long march plan will be finalised during the all-party session scheduled to be held on January 25.

“The government does not realise the grievances of the common man,” he said, adding that the “entire nation will participate in this anti-government march.”

Shedding light on the agenda of the meeting which is to be held on January 25, he said that the anti-government alliance parties are considering options for “the immediate dismissal of the incumbent government.”

“We appeal the coalition parties of the government to think in the national interest of Pakistan and about common people,” Fazl said, adding that the PDM wants to keep Pakistan’s have a “free economy.”

Speaking on the occasion, the PML-N president said that in the 74-year history of Pakistan, “the PTI government is the most incompetent one to ever come to power” adding that the country is undergoing the “most difficult period.”

Shedding light on the “mini-budget”, he said that a new wave of inflation will be seen because of the supplementary finance bill presented by the government.

Endorsing his views, Fazl added that PDM will become the “voice of the common man against rising inflation.” “We believe that the people will directly fight for their rights,” the PDM chief said, adding that this long march will be a “revolutionary step in the history of Pakistan.”