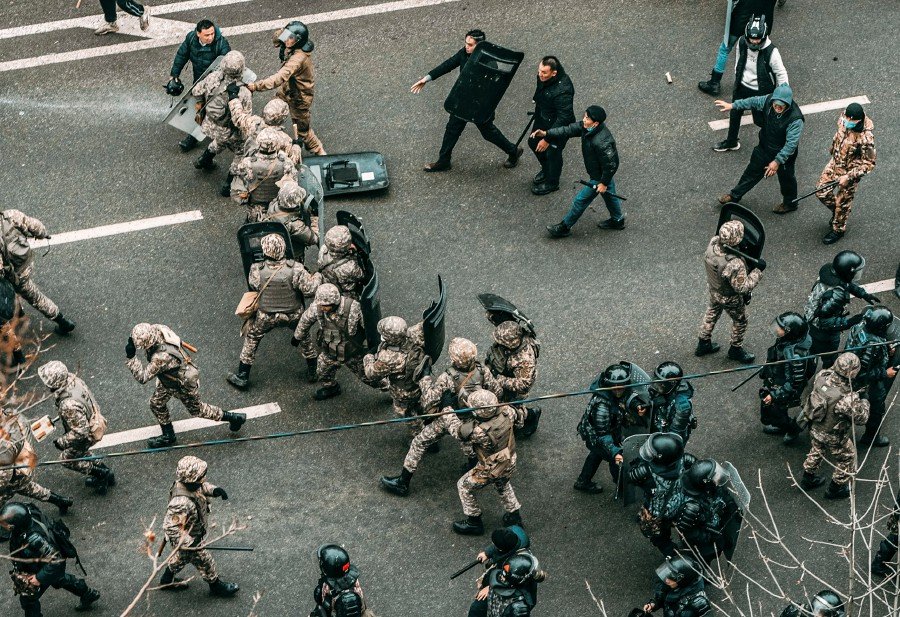 Kazakhstan’s president on Friday rejected calls for talks with protesters after days of unprecedented unrest, vowing to destroy “armed bandits” and authorising his forces to shoot to kill without warning.

In a hardline address to the nation, Kassym-Jomart Tokayev also gave “special thanks” to Russian President Vladimir Putin after a Moscow-led military alliance sent troops to Kazakhstan to help quell the violence. Security forces had blocked off strategic areas of Almaty — the country’s largest city and epicentre of the recent violence — and were firing into the air if anyone approached, an AFP correspondent said.

Elsewhere the city was like a ghost town, with banks, supermarkets and restaurants closed. The few small shops still open were fast running out of food. Late Friday, the United States authorised its non-emergency consulate personnel, and the family members of all staff, to leave the country.

Tokayev, in his third televised address this week, said order had mostly been restored. “Terrorists continue to damage property… and use weapons against civilians. I have given the order to law enforcement to shoot to kill without warning,” he said. He ridiculed calls from abroad for negotiations as “nonsense”. “We are dealing with armed and trained bandits, both local and foreign. With bandits and terrorists. So they must be destroyed. This will be done shortly.”

Western countries have called for restraint on all sides and respect for people’s right to protest peacefully. China’s President Xi Jinping however praised Tokayev for taking “strong measures”.

Long seen as one of the most stable of the ex-Soviet republics of Central Asia, energy-rich Kazakhstan is facing its biggest crisis in decades. The initial cause of the protests was a spike in prices for compressed gas in the country’s western energy heartland but a government move to lower the prices failed to stop demonstrations continuing.

The violence erupted late Tuesday, when police fired tear gas and stun grenades at a thousands-strong protest in Almaty. The next day protesters stormed government buildings including the city administration headquarters and presidential residence, setting them ablaze, and a nationwide state of emergency was declared.

The interior ministry said 26 “armed criminals” had been killed in the unrest. It said 18 security officers had been killed and more than 740 wounded, and more than 3,800 people detained. The numbers could not be independently verified and there was no official information about casualties among civilian bystanders.

The full picture of the chaos has often been unclear, with widespread disruptions to communications including mobile phone signals and hours-long internet shutdowns.

Most flights into the country have been cancelled, and Russian news agencies quoted Almaty airport officials saying it would be closed to all but military flights until Sunday. On Wednesday Tokayev appealed for help from the Russia-dominated Collective Security Treaty Organisation (CSTO).

Russia’s defence ministry said Friday nine planes carrying paratroopers and hardware had landed in Almaty and Russian forces had helped to secure the airport. It is not clear how many troops are being sent in the force — which includes units from ex-Soviet states Russia, Belarus, Armenia, Tajikistan and Kyrgyzstan — but media in Moscow have said the Russian contingent is expected to number less than 5,000.

Putin’s spokesman Dmitry Peskov told Russian news agencies the Russian leader and Tokayev had spoken several times in recent days to discuss “the situation in Kazakhstan and joint actions within the framework of the CSTO”.

Tokayev said Almaty had been under assault from “20,000 bandits” with a “clear plan of attack, coordination of actions and high combat readiness”. He blamed “so-called free media” and unnamed foreign figures for instigating the violence, adding: “Democracy is not permissiveness.”

Tokayev has announced several moves to head off the unrest, including the resignation of the cabinet and six-month fuel price limits. The protests are the biggest threat so far to the regime established by Kazakhstan’s founding president Nursultan Nazarbayev, who stepped down in 2019 and hand-picked Tokayev as his successor.

Much of the anger appeared directed at Nazarbayev, who is 81 and had ruled Kazakhstan since 1989 before handing overpower. Many protesters shouted “Old Man Out!” in reference to Nazarbayev, and a statue of him was torn down in the southern city of Taldykorgan.

Critics have accused him and his family of staying in control behind the scenes and accumulating vast wealth at the expense of ordinary citizens. The ex-president has not made an appearance since the start of the crisis and there were unconfirmed reports of him and members of his family fleeing the country. However, Belarusian President Alexander Lukashenko held a phone call with Nazarbayev to “discuss” events in Kazakhstan, Belarusian news agency Belta reported on Friday evening citing Lukashenko’s press service.