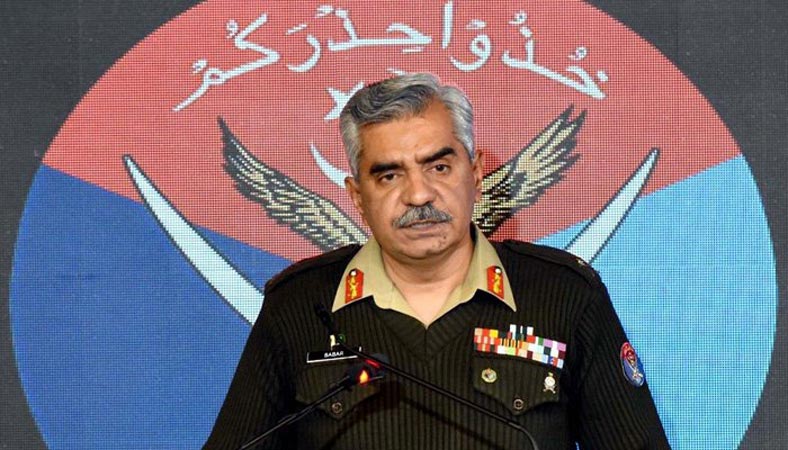 “I will only say this about the issue – that it is all baseless speculation,” he said while addressing an important press conference in Rawalpindi.

“If someone speaks about such a matter, I would request you to ask them who is striking a deal. What are the specifics? What is the evidence that someone is out to make a deal?” Maj Gen Iftikhar asked.

He said there was no such thing going on and reiterated that if someone does talk of it, they must be asked for evidence. “In my understanding, I am very clear on that, this is all absolutely baseless speculation and the lesser we discuss it, the better for the country,” he added.

Maj Gen Babar said there was no trouble afoot when it came to the civil-military relations. “I say this time and again that the armed forces are a subservient institution to the government of Pakistan and work in accordance with their directives,” he said. “That is it. There is nothing more to it. And one must avoid any speculation in this,” the military spokesperson said, adding: “Keep the establishment out of it (such debates) and don’t argue about this.”

He said there were other more important issues that there was a greater need to talk about such as education, health, infrastructure development, population growth and agriculture.

To a question about the status of talks with the terrorist outfit Tehreek-e-Taliban Pakistan (TTP) and the ceasefire deal earlier reached with it, Gen Babar said the ceasefire agreement had ended on December 9.

“As far as our talks with the TTP are concerned, they are on hold and operations are continuing. It was a confidence-building measure taken, to actually go into talks with the violent non-state actors on the request of the current Afghan government.

“After August 15, this was a requirement given by Pakistan to the interim Afghan government that TTP should not use Afghan soil against Pakistan. So it was under that context that they gave this option that they would bring them to the table and make them accept what Pakistan wants,” he explained.

“But those terms and conditions were yet to be settled. Obviously, you would understand that TTP is also not a monolith, they have some internal differences. So, there were some problems, some conditions that were non-negotiable from our side. And so, there is no ceasefire, we are fighting, we are conducting operations every day and will continue doing so, till the time we get rid of this menace,” the military’s spokesperson said.

Gen Babar said he will be going over issues pertaining to Pakistan’s eastern border, western border, landmark achievements of Operation Radd-ul-Fasaad, and will take questions, if any, at the end. Speaking about the eastern border, he said under the ceasefire agreement reached with India in February last year, the Line of Control (LoC) “remained peaceful throughout the year”.

“The biggest dividend is that the people, who live around the area, have seen a definite improvement in their daily lives. But alongside this, the false accusations and the propaganda by the Indian leadership that has continued points towards a particular political agenda,” he said.

He said the fundamental purpose of that was to draw away the attention of the international community from the “systematic demographic changes” India was implementing in occupied Jammu and Kashmir.

He noted that on the one hand India was on a path of religious extremism, which the whole word was aware of now, on the other, it had endangered the entire region’s security with its “never ending series of defence procurement”.

The DG ISPR said this will not only shift the balance of traditional warfare, but will lead to an arms race in the region, which will have a severe and negative impact on peace.

“Recently, the Indian army staged a fake encounter in Kirin sector which is front of Neelum Valley, and in the name of countering infiltration, martyred an innocent Kashmiri, and then blamed Pakistan for it,” he said.

Maj Gen Iftikhar said the photos circulated by the Indian media of the alleged terrorist named Shabbir, is not only alive but is present at home in the Azad Kashmir area of Sharda.

Noting that India has martyred several Kashmiris before this around the LoC area, he said the truth is that it has already tried to externalise Kashmir’s indigenous freedom struggle.

But now, voices have begun to reverberate throughout India, occupied Kashmir and the entire world that Indian armed forces are targeting innocent Kashmiris in the name of counter terrorism and are trying to illegally crush their completely legitimate and indigenous freedom struggle, Babar said.

He said in Kashmir the worst siege in human history had been going on since August 2019.

Speaking of The Russell Tribunal on Kashmir, which was held in Sarajevo, Bosnia-Herzegovina, between December 17-19 and 2021, he said its findings are “eye-opening”.

He said t15 international judges and experts took part in the tribunal, which focused on four areas, namely genocide, decolonisation, secular colonialism and war crimes against Kashmiris.He said the participants made special mention of reports by Amnesty International and Human Rights Watch which recorded instances of human rights violations by India and how Indian armed forces have been waging a military, political, economic, social, and cultural war against Kashmiris, and how they are violating the Geneva Convention and other international laws.

Gen Babar said today, January 5, marked an important day, as it was on this day in 1949 that the people of Kashmir were promised the right to self-determination by the United Nations.

“That promise remains unfulfilled,” he said, adding: “We salute the everlasting struggle, and their unparalleled sacrifices and courage of the Kashmiri people.”

Gen Babar said on the western border, the security situation “remained challenging” in 2021.

The western border management, especially the Pak-Afghan international border, had local, operational and strategic dynamics and were taken up with relevant authorities and addressed from time to time.

In 2021, an important operation was conducted in North Waziristan which led to the complete restoration of the state’s writ at the Pak-Afghan border, the DG ISPR said.

He explained that this is an area where tough weather conditions persist and inaccessible locations enabled the terrorists to move about easily on both sides of the border.

Maj Gen Iftikhar said an abrupt evacuation of foreign troops from Afghanistan in 2021 had a direct impact on Pakistan’s security. However, he noted that the military is completely focused and that under the western border management regime, will complete the ongoing works within the allotted time.

The military’s spokesperson said 94% of the fencing works at the Pak-Afghan border had been completed and were more than 71% complete at the Pak-Iran border.

The fence installed at the Pak-Afghan border provides security to people on both sides of the border and is the need of the hour when it comes to movement and trade, he said.

“Its purpose is not to divide the people, but to provide them protection. People are moving in and out every day at the border through border terminals and predetermined crossing points, and with time, Pakistan will make this process even more effective,” said the military’s spokesperson.

“The blood of our martyrs has been shed while installing this fence. It is a fence of peace, it will be completed, and will InshaAllah remain standing,” the DG ISPR said.

“While dealing with rumours, misunderstandings and spoilers, we must also deal with a local incident or two that springs up with tolerance, so that our primary aim, the achievement of peace can be ensured,” he added.

Maj Gen Iftikhar said in this regard, the governments of Pakistan and Afghanistan were on the same page. Pakistan has 1,200 posts at the Pak-Afghan border, while on the other side of the border, there are only 377 posts, he said.

This means that there is a distance of about 7-8 kilometers between each post, and as a result, it is a challenge to keep a check on terrorist activities from the other side of the border, he said.

In 2021, 164 border forts along the Pak-Afghan border and on the Pak-Iran border, 31 border forts and 60 watch towers were established. In all, 633 border forts, border ports and border terminals have been made.

Pakistan has formed 67 new wings for Frontier Corps Balochistan and Khyber Pakhtunkhwa to further strengthen its border security, while six new wings will be established soon, he said.

It is being ensured that the border terminals in Torkham, Kharlachi, Ghulam Khan, Angoor Ada, Badini and Chaman are functional for movement of people and cargo, due to which there has been considerable success in controlling smuggling and narco traffic, the military’s spokesperson said.

Maj Gen Iftikhar said the current situation in Afghanistan could lead to a grave humanitarian crisis, which would have a direct impact on Pakistan.

“The army chief has spoken at several forums and informed international delegations about this matter,” the DG ISPR said.

Talking about Operation Radd-ul-Fasaad’s success over the past year, he said it was a project that was neither military nor area-specific. Pakistan’s security forces have conducted operations, destroyed organised structures of terrorists, and eradicated several terrorist organisations in the course of work under this operation, he said.

In 2021 alone, under the operation, more than 60,000 intelligence-based operations were conducted, he said.

Intelligence agencies, in 2021, issued 890 threat alerts due to which 70% of terrorism-related incidents were prevented. The terrorists, planners and facilitators were exposed and arrested in the incidents that did take place, he said.

Maj Gen Iftikhar noted that polio security teams in Balochistan and Khyber Pakhtunkhwa were being targeted, “but despite challenges, the polio campaign is successfully being carried out”.

He praised the efforts of both the security teams and the polio workers to continue their all important work “without worrying about the threat to their lives”.

He said under a dedicated effort, in the tribal areas, 50 demining teams were deployed due to which more than 70,000 mines and unexploded ordnance was recovered and several valuable lives saved. Many security forces personnel were injured and even martyred in these efforts, he added.

Speaking of Karachi, considered one of the biggest cities in the world population wise and one that is viewed as Pakistan’s economic backbone, was ranked at number 6 in the world crime index and in 2021 ranked 129.