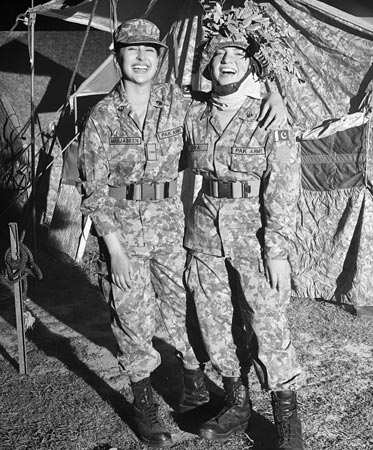 Social media influencer Dananeer Mobeer, who rose to overnight fame from her viral ‘pawri’ video, recently celebrated her birthday in a star-studded bash.

On Dec. 27, the internet sensation, who has recently marked her acting debut with drama serial Sinf-e-Aahan, was joined by her co-stars Syra Yousuf and Yumna Zaidi and others as she celebrated her big day.

On the special occasion, Dananeer’s co-star and renowned face of TV and films, actress Kubra Khan turned to her Instagram and penned a loving note for the ‘pawri’ girl.

In the note, the Alif actress wrote, “Meri Choti Aur Pyari Geena, Happy Birthday my little bundle of talent packed chota gunda. Before going to the sets of Sinf I never though I’d end up getting along with someone so much that ima gain a a little sister. I loves you so much my little soldier. I cannot wait for everyone to see and fall in love with the colours and smiles you bring to everyone!”

Alongside the note, Kubra also posted a behind-the-scenes picture with Dananeer. The two could be seen dressed up in soldier’s uniform from the sets of their latest drama serial.

Kubra and Dananeer have shared the screen space in latest drama serial Sinf-e-Aahan.