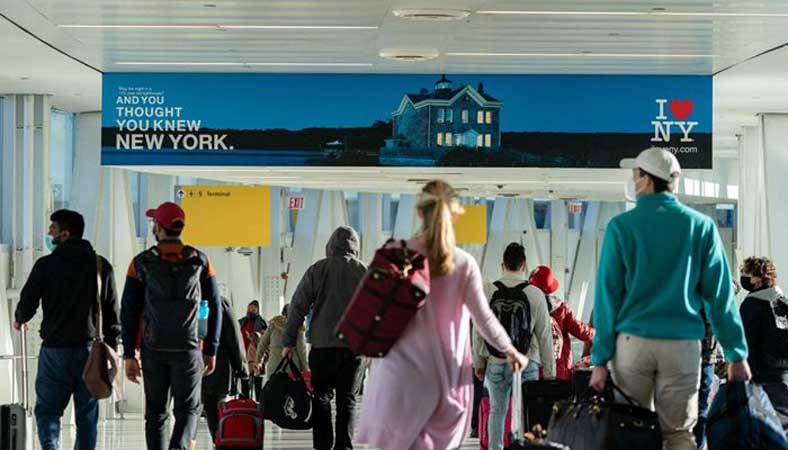 US airlines canceled about 800 more flights on Monday after nixing thousands of flights during the Christmas holiday weekend, as Omicron cases across the country rise, forcing crews to isolate and travelers to seek other forms of travel.

Shares of American Airlines Group, United Airlines Holdings Inc, Delta Air Line Inc and Southwest Airlines were down between 2% and 3% in trading before the opening bell.

Nearly 740 flights were canceled within, into, or out of the United States by early Monday morning, a tally on flight-tracking website FlightAware.com showed.

The flight cancellations on Monday were on top of over 3,000 cancellations during the Christmas holiday weekend, typically a peak time for travel for Americans.

With rising infections, airlines have been forced to cancel flights, with pilots and cabin crew needing to quarantine, while poor weather in some areas added to travelers woes.

Delta, United, Southwest and American did not immediately respond to Reuters’ requests for comment.

Cruise operators Norwegian Cruise Line Holdings, Royal Caribbean Cruises Ltd and Carnival Corp were also down between 1.3% and 2.4%. Over the weekend, at least three cruise ships were forced to return to port after COVID-19 cases were detected on board, according to media reports.

Meanwhile, the locked-down Chinese city of Xi’an has tightened Covid-19 controls to the “strictest” level, banning residents from driving cars around town in an effort to control the country’s worst outbreak in 21 months, AFP reports. Xi’an – where 13 million residents are facing their fifth day of home confinement – is at the centre of a flare-up that has pushed nationwide daily infections to their highest numbers since March last year.

Restrictions tightened further on Monday as Xi’an announced it would impose the “strictest social control measures”, according to a city government social media account.

French President Emmanuel Macron is expected to announce new Covid-19 measures as the country braces for a new surge in cases due to the rapidly spreading Omicron variant, reports AFP.

Officials have warned that hospitals again risk being overwhelmed after a record 100,000 cases were reported on Saturday, the highest daily level in France since the pandemic began nearly two years ago.

Health experts have estimated the number of daily cases could increase rapidly by mid-January, even though millions of people have received booster shots in recent weeks.

The Democratic Republic of Congo is the least vaccinated country against Covid-19 in the world and now a fourth wave of the coronavirus threatens to put greater pressure on its rickety health system than at any time during the pandemic, Reuters reports.

“We have experienced the three previous waves gradually, but in the fourth wave cases have jumped overnight,” said Francois Kajingulu, the head of St Joseph Covid Treatment Centre. “On Monday we had five to six cases and on Saturday we went straight from 30 to 36,” he said.

The increase is part of an Africa-wide surge that saw weekly Covid cases spike 83 per cent in mid-December, driven by the Delta and Omicron variants, although deaths remain low, the World Health Organisation said.

“In this procedure, no data on efficacy against the Omicron variant were submitted,” Swissmedic said in a statement.

The antibody treatment was already authorised for prescription in Switzerland under Covid-19 Ordinance 3 since April 15, Swissmedic said.

Oman will not allow employees in the public or private sectors to enter their workplace without a vaccination certificate that proves they are fully vaccinated, the health minister has said, according to Reuters.