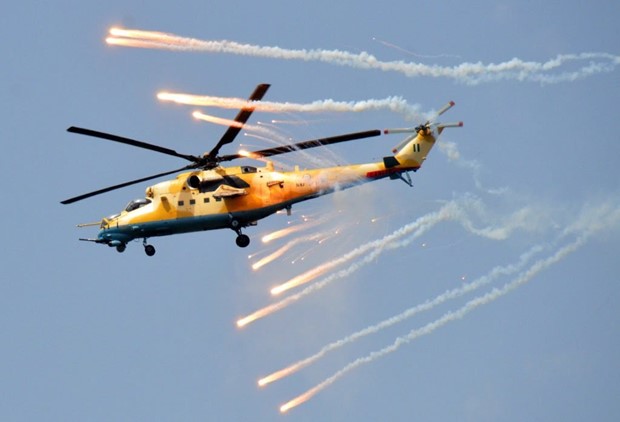 More than 100 jihadist fighters were killed in airstrikes by the Nigerian military last week, security sources and residents told AFP on Tuesday.

ISWAP has been consolidating its power in the Lake Chad region since the death in May of the leader of rival Islamist group Boko Haram during infighting between the two groups earlier this year.

ISWAP split from Boko Haram in 2016 and has since become the dominant jihadist force in Nigeria’s conflict, frequently striking at troops in an insurgency that has killed more than 40,000 since it began in 2009.

A military officer in the region said “100 terrorists were killed” during “surgical air raids” in Marte, a district in the country’s far northeast.

“The airstrikes followed meticulous planning after intelligence reports established the presence of large numbers of terrorists in the three locations,” the officer added.

A Nigerian intelligence source in the region said it was difficult to give an exact toll but confirmed “well above 100” fighters were killed.

Huge numbers of ISWAP jihadists had moved to the three camps days earlier following fighter jet attacks on other villages.

They had taken 20 vehicles including mine-resistant trucks, the intelligence source said, adding that “all the vehicles were destroyed in the strikes along with several heavy weapons”.

A local fisherman in the region said the militant group suffered huge casualties.

“They have been hard hit by the recent attacks. They buried the more than 100 dead bodies in Tudun Giginya village, which took them almost the whole day,” said the fisherman, who asked not to be identified for personal safety.