* Del Rey is surer of herself than ever before as the album cover shows her sitting confidently, securely beside her dogs

This past year was definitely one for change, to which singer-songwriter Lana Del Rey was no stranger. The career of Del Rey has taken many turns within the past several months that seemed to help her create two full-length studio albums within seven months. Prior to her working on these records, people assumed the singer no longer had a career. First, Del Rey received extensive backlash for dating a police officer, which Twitter had a month-long dispute over. Then, she lost multiple nominations, such as an Album of the Year win at the 2020 Grammys for her work on Norman F****** Rockwell (2019), critically reviewed as one of the greatest albums within the past decade.

Then Del Rey’s pledges for feminism faced scrutiny, to which she responded by asking why she was being crucified for singing about topics that her female counterparts were singing about also. For 10 years, she glamorized imperfect relationships, addiction and submissive behavior, which has come with significant backlash from the media.

Many believed her career was over, but it seems those rumors were fuel to her fire. Del Rey’s artistic flair seemed to take flight as she entered 2021, with a new perspective and a willingness to put more of her life into her music.

Blue Banisters released Oct. 22, and is a thorough and poetic retelling of the events she endured within the past two years. This record also serves to articulate what Del Rey has done to grow from her hardships. 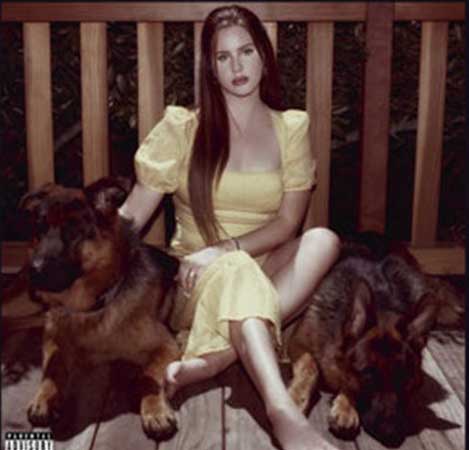 The official album cover features her sitting solemnly on her balcony in Northern California, guarded by her two dogs – a fresh look for the singer who has helplessly sung about older rich men and troublesome relationships throughout her career. The lyrics are an even fresher take on the singer’s new image and distinguished sound.

The record opens with the simple production of “Text Book,” in which Del Rey talks about her former boyfriend and realizes she was mistakenly looking for the father she wanted. This song takes an unsuspecting turn when she says that her uniqueness made him inadequate to her; to which she continues to heal.

“People say we’re too much alike / But maybe, finally, that’ll make it right in the end / Of all these sleepless nights / Other men I met felt right / Would smile at you and stick a knife in your back / Finally, I met you, so I’m not wonderin’ why,” Del Rey sings in “Text Book.”

Surprisingly, what Del Rey finds isn’t the warm embrace of a man, but instead, it is the companionship of her girlfriends, to which she applauds on the title track. “Blue Banisters” opens with a soft piano instrumental with Del Rey recounting the great American road trip that her previous record “Chemtrails Over the Country Club” referred to.

“He said he’d fix my weathered fame / Give me, children, take away my pain / And paint my banisters blue… All my sisters fly to me / To paint my banisters gray,” Del Rey sings in the title-track. Within emotional hardship, she found inner peace and most importantly refuge within the strength of her friends. This track served as an homage to the young woman she was when she released “This Is What Makes Us Girls,” when the companionship of her friends was less significant than her love for bad boys. Del Rey then dives deeper into a more personal concept: her disbandment from the public eye. “Arcadia” is piano-driven and serves as an ode to her glamorous Los Angeles dream she must bid farewell to. Nonetheless, “Arcadia” is a heart-wrenching track that almost says goodbye to Del Rey and paints a poignant picture of starting brand new. “They built me up 300 feet tall just to tear me down so I’m leaving with nothing and this town,” Del Rey sings.