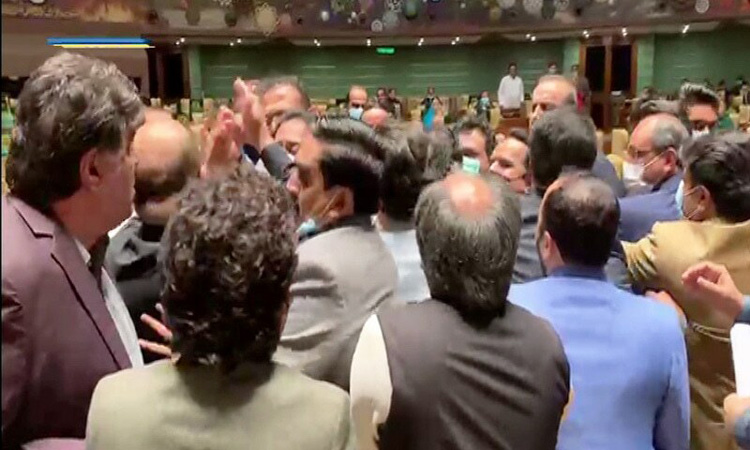 Commotion ensued in the Sindh Assembly this Saturday when the controversial Sindh Local Government (Amendment) Bill 2021 was passed again, with minor amendments to the original version, amid uproar by members of the opposition and a tussle between Pakistan Tehreek-i-Insaf and treasury members.

In the said bill, among the noticeable changes that were conceded by the PPP were doing away with the the clause to elect any person (and not just elected members) as the mayor, deputy mayor, chairperson or vice-chairperson. The clause mandating elections for these posts through a secret ballot was also removed. The bill, which was initially passed during the opposition’s absence at a session last month, basically takes away functions of health and education from the municipal bodies. It also does away with district municipal corporations (DMCs) in urban parts of the province, replacing them with town municipal corporations. The bill has been rejected by the opposition, which had chosen not to attend the assembly proceedings in protest when it was first presented. However, the PPP, had it passed despite the opposition’s absence in the same session on the basis of its majority, following which it was sent to the Governor of Sindh, Imran Ismail for his assent. Ismail had, returned it to the Sindh Assembly for reconsideration. When the bill was presented again today, on Saturday by Sindh Local Government Minister Syed Nasir Hussain Shah for reconsideration, members of the opposition raised slogans, such as “robbery on rights is unacceptable”, and tore up copies of the agenda. They gathered in front of the speaker’s podium as the bill was passed, with the chair asking the protesting members to move aside as he was unable to see Nasir moving the bill. The Leader of the Opposition in the Sindh Assembly Haleem Adil Sheikh went on to dub the bill “a black law”. Nasir said Sindh Chief Minister Murad Ali Shah had met Governor Ismail on the matter and the objections raised on the bill had been addressed. “There has been a hue and cry [on the bill], when we have actually given more powers to local government institutions,” he remarked. The minister assured that local government representatives would be empowered under the new bill, adding that PPP Chairperson Bilawal Bhutto-Zardari had called for increasing their powers. ‘Nothing worse than an illiterate opposition’ Chief Minister Murad also addressed the House on the occasion, criticising the opposition for protesting against the bill. Reaffirming that the bill was in line with what the people of Sindh had expected, the Chief Minister added that the PPP had passed the bill in an urgency because the Election Commission Pakistan (ECP) had set a deadline. He was referring to the ECP’s deadline of November 30 for the Sindh government to provide prerequisites for holding local government elections in the province. He added that there was still room for further amendments to the bill. He then alleged the opposition was indulging in linguistic politics. Criticizing the Muttahida Qaumi Movement, Shah commented: “The one who created linguistic differences is sitting in London. You have disowned him but have not dissociated from his ideology.” “Love Sindh. You are from Sindh,” he continued, adding that the bill had been presented after consulting all stakeholders.

Speaking about the Sindh Solid Waste Management Bill, 2021, in the House, Nasir said the clause on the mayor heading the SSWMB had been added on the opposition’s demand.

He said the SSWMB was formed because of the poor performance of DMCs and the board should comprise elected representatives.

“Previously, the chief minister, and then the local government minister used to head it, and now a mayor will head it. This was demanded by the opposition and we have accepted this demand.” Later, Nasir addressed the media alongside Sindh Information Minister Saeed Ghani outside the provincial assembly.

He told reporters that 80 per cent of the amendments proposed by the governor had been made to the local government bill. Moreover, Ghani rubbished the claims that the opposition was not allowed to debate the revised draft of the bill in today’s session. “To say that an opportunity was not given [to the opposition to speak] is completely wrong and [shows] their ignorance,” he said. Ghani also criticised opposition members for their “unruly behaviour and inappropriate conduct” during today’s proceedings, saying that many of the opposition’s demands regarding the bill had been accepted by the Sindh government.