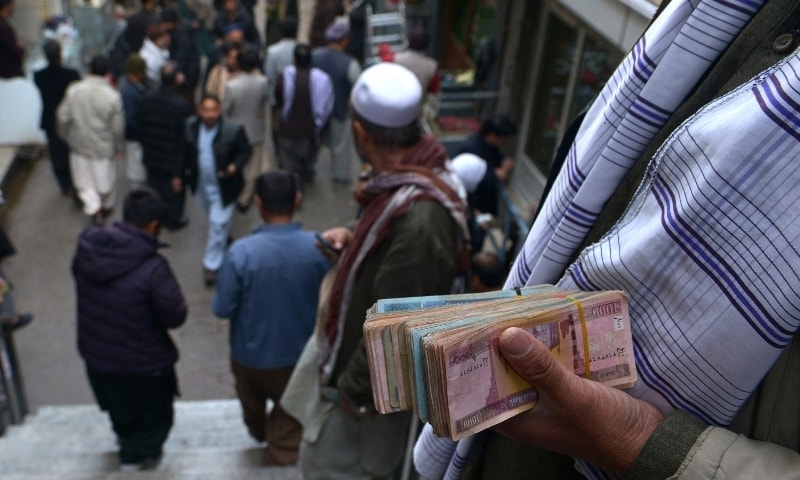 Afghanistan’s currency hit 100 to the US dollar on Tuesday, losing five percent of its value in one day in a panic triggered by fears that one of the country’s biggest banks could collapse, traders said.

Afghanistan has been hit by an enormous shortage of dollars since the Taliban marched into Kabul and seized power on August 15, as international donors suspended billions in aid provided annually to the previous regime.

Since the Taliban takeover, the US has frozen around 10 billion dollars in reserves that Afghanistan’s central bank had parked in the US Federal Reserve.

The crisis looked set to deepen overnight and this morning when news circulated that Maiwand Bank among the country’s five biggest lenders, according to traders had collapsed.

But “trust has been eroded,” he said, as Maiwand has in recent weeks failed to return funds owed to the commission, which has some eight million dollars deposited in the bank, Ahmadzai said.

A spokesman for Maiwand said that the bank remained operational and was continuing to honour commitments to depositors in line with central bank directives.

One financially insolvent trader among the hundreds at Kabul’s open air exchange held his head in his hands, repeatedly crying out: “I have drowned!” The Afghani stood at 104.5 to the greenback in late Tuesday trade, compared to around 80 in early August.

One trader said that the market is being hit by fears of a much wider collapse of the country’s financial system.

“There are rumours about the collapse of all Afghanistan’s banks,” said Bilal Khan as he counted batches of Afghanis.

“There is no money in the banks. The banks are refusing to pay your own money to you.” Khan also cited a dawning realisation in the market that the Taliban will not be recognised by the international community any time soon. Traders had initially expected that “the new government would be recognised,” he said.